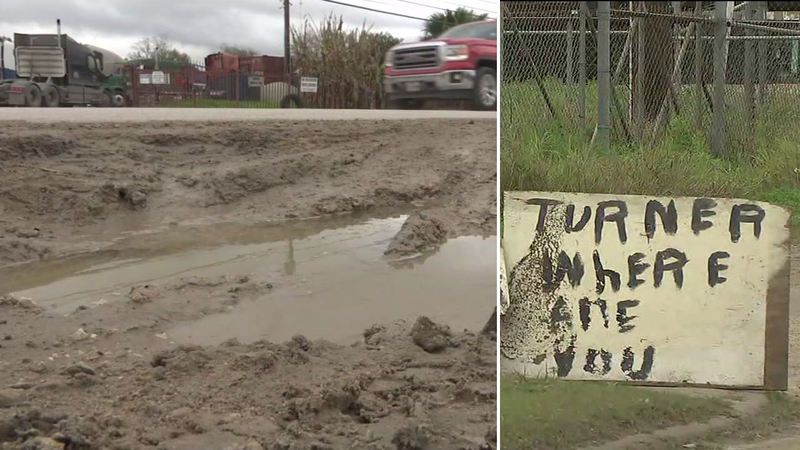 HOUSTON, Texas (KTRK) -- Some east Houston drivers are tired of waiting for a pothole-riddled street to get fixed.

For years, neighbors said Oates Road has needed an upgrade. It's gotten so bad, there are signs along the road warning drivers of the danger.

For years, his family has pleaded with the city to do something.

"It's frustrating," Lodge said. "Frustrating are my feelings."

To get attention, Lodge launched a website, and placed signs along the street. Eyewitness News learned over the past eight months, 65 reports to the 311 hotline were made about potholes and road conditions.


Lodge took the concerns directly to city hall. Nearly a year ago, he showed leaders photos of the street.

"It's a bad road," Mayor Sylvester Turner told Lodge at the April 2018 council meeting. "It does need to be reconstructed. It is a question of resources."

Months later, drivers are still waiting for those resources.

Councilmember Robert Gallegos oversees the area. He said the street is scheduled to be resurfaced in three years. But he feels like that would be a waste. Instead, he wants to reconstruct the road.

He tried to work with the county last year, but he says the commissioner never responded. There's a new county commissioner, and Gallegos said they're open to partnership projects.

Repairs could still be months or years away. It's time drivers say you simply don't have when you rattle along this road.

"I would almost describe it as on the back of a bull at the rodeo right now, being blind-folded, and that's how it throws you around in your car," Lodge said.

One frustrated person posted a sign along this road asking Mayor Turner where he is. While some are frustrated with the mayor, Lodge says this problem started before he took office.

"Oates is a road that was not build for continuous daily use by industrial vehicles. City streets that are being used as industrial roads like Oates present a unique challenge for the City. Houston Public Works put an overlay on Oates five years ago and performed routine maintenance as requested by the community. Transportation and Drainage Operations also filled 53 pothole requests from March 2018 to today. The need for reconstruction has been identified and the evaluation is making its way through our Capital Improvement Projects process."

The Houston mayor's staff questioned my video on Oates Rd potholes. They suggested I need a new tripod for my iPhone. If would to see Oates Road conditions, Mayor @SylvesterTurner, @JeffSyptak & @IAmMaryBenton, I'm happy to show you https://t.co/weUXVqOhid pic.twitter.com/sKfncu81DN

He really needs a sturdy tripod. I drove the streets in East Houston yesterday and they were not that bad. Just sad that he did not have his phone securely fastened.

If you need better equipment @NickABC13, more than happy to provide some recommendations. @JleeSol https://t.co/UMIUlCHlry

Also noted, no other vehicles are shaking like that.