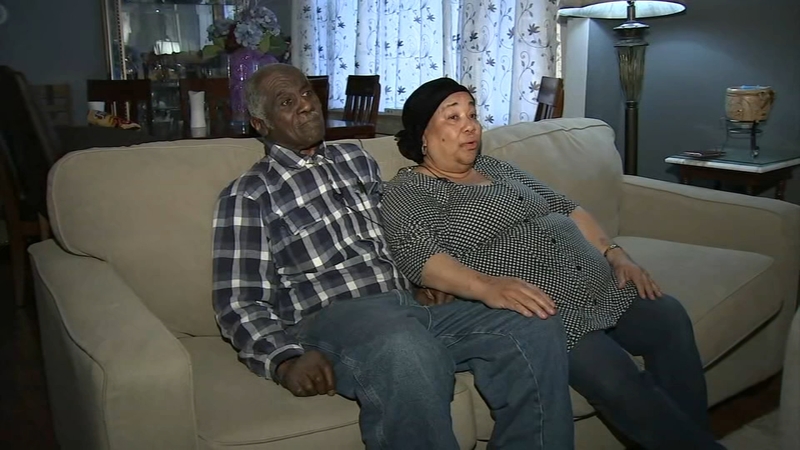 OAK PARK, Illinois -- A couple is upset and shaken up after police swarmed their car in a parking lot after they left their normal bank.

Ottis Dugar, 86, and his 67-year-old wife Demitri still can't believe they were mistaken for armed thieves.

The two great-grandparents said they were handcuffed and detained for about 40 minutes.

"I really had to think, sir," Ottis said. "If I would've made any false move, they would have started shooting."

Ottis is a Korean War veteran with glaucoma and Demitri is diabetic. They said the incident happened after they left their bank. Demtiri was driving Ottis to a Denny's when they were surrounded by Oak Park and River Forest police, all with guns drawn.

The couple said they were handcuffed in separate vehicles, detained for about 40 minutes and ordered out of the cars several times to be identified by bank witnesses.

In a statement the Village of Oak Park said the incident "was a case of mistaken identity based on the initial report of an eyewitness to an armed robbery" and that the "witness continued to say the individuals were the ones seen leaving the bank."

A bank teller finally told the cops they had the wrong suspects.

"He can't see to drive! And I can't even walk fast, less only run. But we're bank robbers," Demitri marveled.

Ottis, who's a retired City of Chicago worker, said a sergeant at the scene did apologize. It's unclear if police ever found the real thieves.

FULL STATEMENT FROM THE VILLAGE OF OAK PARK

It was a case of mistaken identity based on the initial report of an eyewitness to an armed robbery of the U.S. Bank, 6011 North Avenue, at about 11:30 a.m. today. The witness provided a description of the car and its license plate number to the 911 operator, who broadcast the information. The car was stopped by River Forest Police on North Avenue. When Oak Park officers arrived, the two occupants of the vehicle were handcuffed and placed in separate cars as is procedure in a felony stop. A show-up was conducted at the stop and the witness continued to say the individuals were the ones seen leaving the bank. However, a teller from the bank brought to the show up corrected the information. The couple was immediately released and officers involved in the incident apologized for the mistaken identity. Officers reported that the man was in his 60s and the woman in her 50s, but no specific information on them was gathered. Officers also said the couple did not express any anger or concern about the incident, which all occurred within just a few minutes.
Report a correction or typo
Related topics:
illinoisbizarrebank robberymistaken identityu.s. & world
Copyright © 2021 WLS-TV. All Rights Reserved.
More Videos
From CNN Newsource affiliates
TOP STORIES