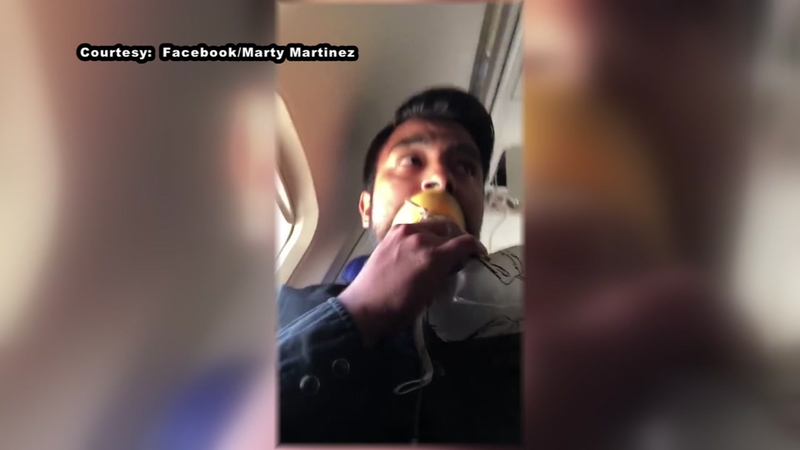 PHILADELPHIA, Pennsylvania (KTRK) -- NTSB officials confirm that one person has died after a Southwest Airlines plane made an emergency landing at Philadelphia's airport Tuesday with part of the covering from its left engine ripped off and a window damaged.

WOMAN KILLED AND SEVERAL OTHERS INJURED

"We do have information there was one fatality," NTSB Chairman Robert Sumwalt said.

Multiple passengers told ABC News that the female passenger killed was nearly sucked out of the plane.

"It is with great sadness that I confirm there was a passenger fatality on flight 1380 today. This is a sad day and on behalf of the entire Southwest family, I want to extend my deepest sympathies for the family and the loved ones of our deceased customer. They are our immediate and primary concern and we will do all that we can to support them during this difficult time and the difficult days ahead. I'm immensely grateful there are no other reports of injuries but truly this is a tragic loss," he said in the video.

In addition to the fatality, another 12 people were assessed by medics, officials said, and seven of those people were treated for minor injuries.

THE FLIGHT AND PLANE

Southwest said there were 144 passengers and five crew members on board the Boeing 737, which was headed from New York's LaGuardia Airport to Dallas' Love Field. Passengers were seen walking off the plane onto the tarmac at the airport after landing around 11:20 a.m.

The Federal Aviation Administration said that the plane landed after the crew reported damage to one of the plane's engines, along with the fuselage and at least one window.

In a press conference Tuesday, Kelly said the plane was delivered in July 2000 and the last date of inspection was April 15, 2018, just two days prior to the incident.

Passenger Marty Martinez did a brief Facebook Live posting while wearing an oxygen mask. He posted, "Something is wrong with our plane! It appears we are going down! Emergency landing!! Southwest flight from NYC to Dallas!!"

SCARY FLIGHT: Passengers on the @SouthwestAir Flight from New York to Dallas have been sharing photos of the blown out engine of the plane after it had to make an emergency landing in Philadelphia. https://t.co/ZuZu2Upltc pic.twitter.com/6NMcC324AF

Kristopher Johnson on board the flight and captured this photo of the engine upon landing at Philadelphia International Airport.

After the plane landed, he posted photos of a damaged window near the engine.

News helicopter footage showed damage to the left engine and the tarmac covered with firefighting foam, although there were no signs of flames or smoke.

Tracking data from FlightAware.com shows the flight was heading west over New York's southern tier when it abruptly turned toward Philadelphia.

@SouthwestAir These are the hero’s of SWA 1380 NYC to Dallas We lost an engine mid-flight and they guided back to Philly saved 149 on board pic.twitter.com/RNA8sXRBZA

It is the world's largest operator of the 737. The Boeing 737 is the best-selling jetliner in the world and has a good safety record.

Investigators are likely to take apart the failed engine from Tuesday's plane and examine maintenance records as they try to piece together the cause of the explosion.
The engine failure was reminiscent of a similar event on a Southwest Boeing 737-700 jet in August 2016 as it flew from New Orleans to Orlando, Florida.

Shrapnel from the engine left a 5 by 16 inch hole just above the wing. Passenger oxygen masks dropped from the ceiling. Pilots landed the plane safely in Pensacola, Florida.

Investigators with the National Transportation Safety Board said one of the engine's fan blades broke off from the hub during the flight. The broken edge of the blade showed crack lines consistent with metal fatigue.

The NTSB was sending a go-team to the airport in Philadelphia to investigate.