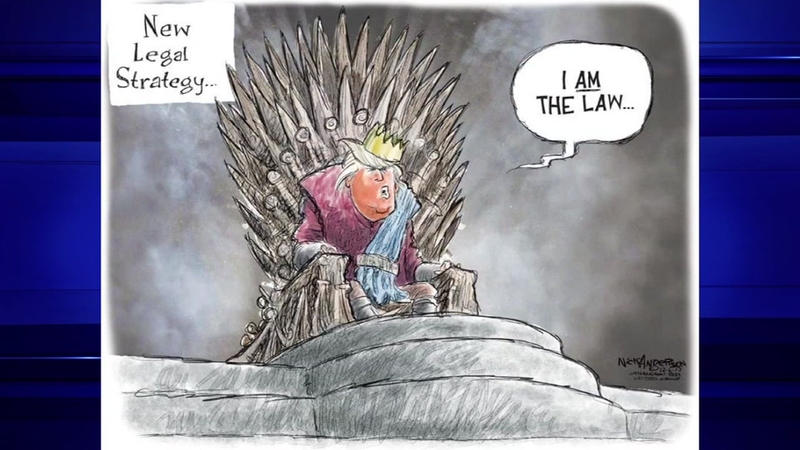 HOUSTON, Texas (KTRK) -- Nick Anderson started drawing cartoons when he was 10. It was pencil and paper then. Now, four decades later his work is state-of-the art and the art of the state.

"I drew cartoons but as I got into high school I blended cartooning into politics," he told Eyewitness News during an interview at his home. "I started doing political cartoons and I liked the left brain, right brain blend of it and I like the sort of analytical policy blend with the creative."

In 2005, he won a Pulitzer which is print journalism's highest award for his work. He was critical of the Iraq war. He said, for years he voted Republican as a check on the Democrats. His father was a Reagan Republican, a big supporter of the 40th President Ronald Reagan. Then, he said, that changed for him during the early years of the new millennia.

Now, he admittedly takes on the opposition and said any good cartoonist would do the same.

He's a freelancer now, working for the Washington Post in syndication and he has popular social media pages. He puts out three cartoons a week. He also has a site at Patreon.com, where subscribers (for as little as $1 per month) can go behind-the-scenes of his work. It's a way to make additional money for his copyrighted work that always seems to end up out there for free.

Famous people, he said, frequently use his cartoons without attribution. It's the double-edged sword of today's world; much wider audience, more creative freedom, but much less control.

"Newspapers are still in the 1970s as far as what their standards are," he said. "And social media you can do a lot more. And so in some respects, I will draw for social media rather than newspapers now."

A lot of that drawing these days focuses on current President Donald Trump.

"He is sucking out all of the oxygen in America as far as politics goes," he said of the president. "He's changing our social norms and our political norms. And everyone is like why are you doing Trump cartoons everyday? Well, because you start to do something else and then he does something else outrageous, and everybody is talking about it, and you can't help but say something about it. "

Again, he is unapologetic. His job is to take sides and, he explained, to get people talking one way or the other.

"I consider my job to provoke thought first, and in the process of evoking thought you often provoke laughter or provoke anger," he said.