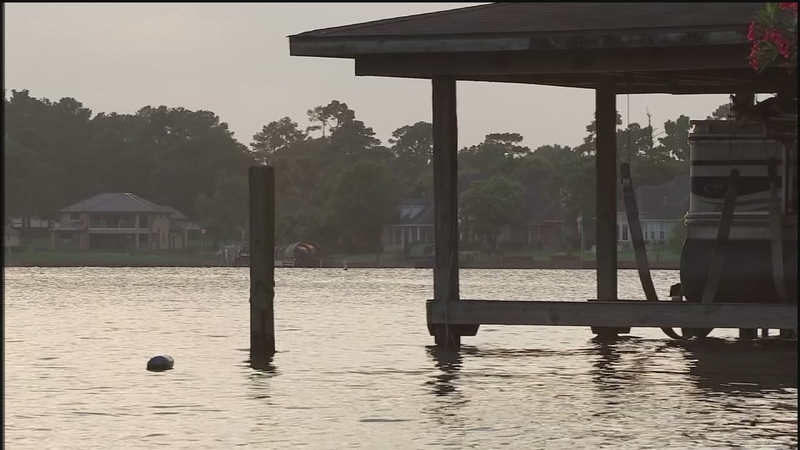 CONROE, TX (KTRK) -- With an increased chance of storms this weekend, there is a new concern about flooding near Lake Conroe. Officials are warning the Lewis Creek Reservoir may not hold up.

A plastic covering has been placed to keep more rainfall from falling on the dam and deteriorating it further. There is concern that it could fail.

Crews from Entergy Texas are working to shore it up, pouring more soil on the dam to strengthen it. They're not only worried about more water, but also that pressure from water inside the reservoir will further damage it, so they're letting water out on the other side.

The main concern is flooding, especially more rain expected this weekend. Residents say they don't know what to do if the dam breaks.

Entergy Texas and the Office of Emergency Management say there's nothing to worry about, but residents near the dam say they're not getting information about the dam and its state.

Late Friday afternoon, automated phone messages were sent, and Montgomery County deputies provided notices to ten neighborhoods south of the Lewis Creek Reservoir dam, that their communities are targeted for a potential evacuation should the dam fail.

Ken and Helen Ryall have a waterfront home. Tonight, the couple was packing up what was most important, in case their worst fear was realized.

"I'm taking my daughter's ashes and pictures of her first of all, " she said. "That's what's most important to us."

Others were collecting important documents and keepsakes, just in case.

And at the Bed, Bath and Biscuit kennel, which neighbors the reservoir, two employees are staying the night, and presumably the weekend should the flooding possibility continue.

"We just don't know what it would be like," said Dawn Burden. The kennel has more than a hundred pets boarding for the long holiday weekend. She's considering calling emergency contacts for the pets, and putting them on standby.