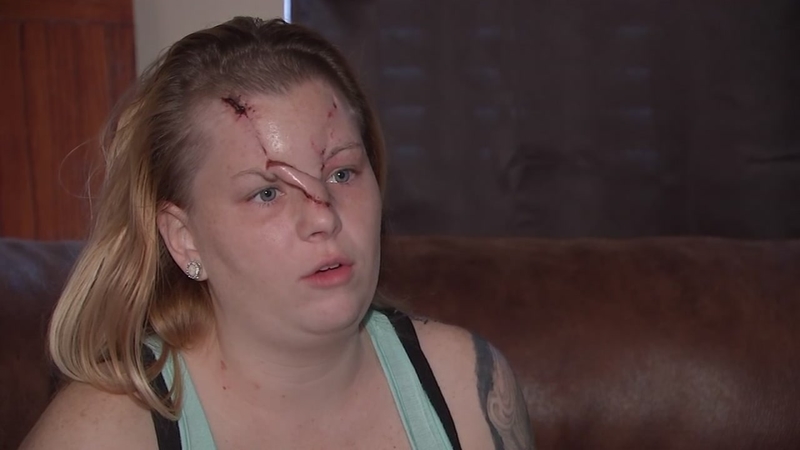 ALVIN, TX (KTRK) -- Brittany Howard and her husband have 2-year-old twin girls and a 4-year-old daughter. Three weeks ago, she came close to never seeing her family again.

"I was shot in the face and survived. Not many people have gone through that and can live to tell about it," said Brittany.

Last month, Brittany's mom called her saying Brittany's father was acting strangely. When Brittany arrived, she said her father had a gun and was threatening to take his own life.

"We both jerked and somehow it went off," she said.

Brittany was shot in the face and has had three surgeries.

"It went three centimeters into my frontal lobe so I have a metal plate in my head," said Brittany.

Three weeks later, she's still healing. She has a skin graft on her nose and has at least three more surgeries to go. Still, despite it all, she has an amazing outlook on life.

"I love my dad. It was an accident," said Brittany.

It was an accident that left wounds she says she can heal from, unlike the scars she could have had if she had lost her father.

"He's completely different. He's completely changed and sometimes it takes a tragic accident or a tragic occurrence to change someone's outlook or perspective on life," she said.

She said her father has been charged with aggravated assault with a weapon of a family member. She's upset with the district attorney's office for charging him. She said it was an accident and he was in a bad place at the time. She said since the shooting happened, her father has changed his perspective on life and has a new outlook. He told her he would spend the rest of his life making this up to her.

Due to the surgeries, Brittany has not been able to work. She has started a Go Fund Me page to help pay for medical expenses.

Also, there is a fundraiser to help pay for expenses on March 4 at Bub's Sports Bar in Alvin. The event will include food, an auction and a raffle.
Related topics:
alvinsuicideaccidental shootingaccident
Copyright © 2022 KTRK-TV. All Rights Reserved.
TOP STORIES
Driver shot after argument in N. Houston, wife fires back, police say
One more hot and mostly dry day, then a pattern change next week
3rd monkeypox case confirmed in Houston area, officials say
There are many ways to eat healthy amid high food prices, experts say
Biden signs landmark gun measure, says 'lives will be saved'
Bank of America apologizes to refugee family for account mix-up
6 people killed over span of 12 hours in isolated incidents in Houston
Show More
Love the outdoors? Galveston Island State Park is reopening
Astros' 2nd time ever to no-hit NY
Houston Pride 2022: Where and how to celebrate
Teenage daughter stabs father during fight in SW Houston, police say
17-year-old charged with murder after giving friend ride
More TOP STORIES News