Who Has the Advantage as Syria Moves to Take on ISIS? 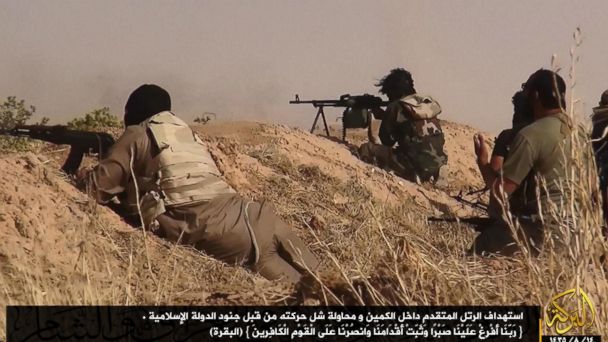 This weekend the Syrian government reportedly bombed Islamic State of Iraq and Syria (ISIS) targets in Raqqa, the group's eastern stronghold and the base of operations for its summer offensives on Mosul and Iraqi Kurdistan.

But ISIS has proven to be a powerful and capable opponent. The group has cut through Deir Ezzor province and began to make headway on the outskirts of Aleppo, just as Assad forces have neared the apex of their own siege of the city. As transit hub and center for supply lines from Turkey, Aleppo would be a resource boon for either side that wins it, while providing a springboard from which to launch a military campaign for control of the Syria's north.

We asked Hassan Hassan, an analyst at the Abu Dhabi research center the Delma Institute and a columnist at the National, and Joshua Landis, editor of Syria Comment and director of the Center for Middle East Studies at the University of Oklahoma, to explain which side has an advantage, and where the first major battle could take place.

Syria Deeply: Who would have the advantage in a battle between the two: ISIS or the regime?

Hassan Hassan: ISIS is a formidable force now, after their Mosul offensive. The regime is capable of taking them on in some areas, but it will be extremely difficult in others. ISIS fighters are preparing for the scenario of a regime attack in areas under their control. The problem with the Syrian regime, as was the case with the Iraqi army, is that they don't have the military capacity to conduct surgical attacks against ISIS bases.

In the past, there was a de facto agreement between the regime and ISIS not to fight each other - but now it seems that the marriage has ended and they are fighting each other in some areas. What the regime needs to successfully battle ISIS are U.S. weapons that can do proper surveillance and conduct surgical attacks against their bases. When there's an offensive against them from the regime or outside, ISIS will shift their tactics and strategy to hide themselves within the communities under their control. So it will be extremely difficult for the regime to target them in areas like Raqqa. Now it's easy in areas like Aleppo because they're out in the open, everyone knows where they are. But they can shift gears.

Throughout Syria, both the regime and rebel forces will find it extremely hard to fight back against ISIS, mainly because they are well trained, have a stronger willpower to fight, have the morale and are advancing steadily. Unlike the rebels, they seem to have a very clear strategy.

Secret Mission to Rescue US Hostages 'Flawless,' Except for the Rescue

Syria Deeply: Where might the first battle between ISIS and the regime likely to take place?

Hassan: It would probably be in Aleppo. That's because with the way ISIS is advancing in rural eastern Aleppo province, it and the regime will very soon be neighbors in some areas. ISIS is advancing on Azaz and other strategic towns near the Turkish border. The regime currently controls the industrial areas of Aleppo, towards the northeast. ISIS will soon be in its backyard.

Once they are face to face, they could stop and go back to their old ways of "don't fight me, I won't fight you." But clashes are more likely, mostly in Aleppo. And if at some point ISIS wants to move north towards Idlib and maybe Hama, there could be clashes between the two in that area as well.

Syria Deeply: What happens to non-ISIS rebel groups as focus shifts to the ISIS-regime fight?

Joshua Landis: What we're moving towards, ultimately, is going to be a contest between the Assad regime and ISIS. The rebel militias that have been extraordinarily fragmented and incapable of uniting are going to get squeezed out by these two very brutal but quite capable forces of ISIS and the regime.

By all accounts the Obama administration is pulling its hair out over the question of who to back in Syria, and whether the present policy of backing the moderate rebels is a staying policy. There's a lot to suggest that it's not. Because for the last three years the stalemate has zapped the power of both the rebels and the regime, creating a power vacuum in the east. And it's there that ISIS has been able to incubate without facing any determined opponent.

The opposition's inability to unite, its constant backbiting - it's dizzying trying to keep track of who is aligned with whom. We're seeing this now in Ghouta, where Jabhat al-Nusra and the Islamic Front seem to be at daggers drawn.

And in Aleppo, they've been incapable of uniting against ISIS. They're being picked off one after the other. Assad's main enemy in Aleppo and Damascus - the areas he truly still cares about securing - are these fractious rebel groups. That's why he hasn't been going after ISIS.

So now what does Obama do about Syria? Increasingly people are beginning to say, You have to side with him, or you at least have to not undermine him by supporting the rebels.

Could Money Have Saved James Foley?

Syria Deeply: With whom will Arab and Western powers side, ISIS or the regime?

Landis: Assad and ISIS are ideological enemies, but they have strategic common interests - they're both busy attacking rebel forces. ISIS has left Assad alone for strategic reasons, which is that it's been busy attacking weaker forces. But the showdown is coming, and regional forces will choose to back Assad. ISIS doesn't have friends there.

Assad is going to get friends out of this - the Syrian conflict has become infinitely more simple today than it was even five months ago for many world powers, because now it seems to be a simple struggle between ISIS and Assad. It's hard to see anyone in the Western world choosing ISIS over Assad.