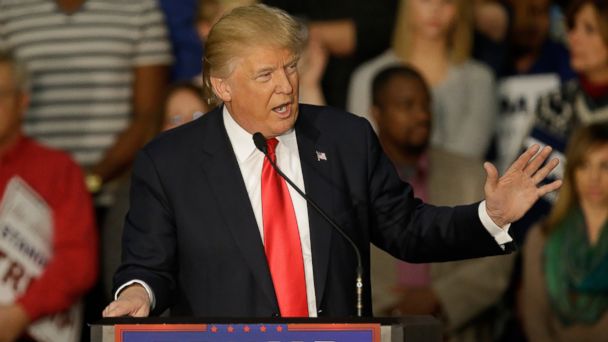 The real estate mogul said in a statement that he now plans to spend roughly $2 million per week on television advertising. The video will start airing in the pivotal early-voting states of Iowa and New Hampshire Tuesday, the campaign says.

"The politicians can pretend it's something else, but Donald Trump calls it radical Islamic terrorism," a voice reads over pictures of President Obama and Democratic presidential hopeful Hillary Clinton, as well as the San Bernandino, California, shooters.

"That's why he's calling for a temporary shutdown of Muslims entering the United States until we can figure out what's going on. He'll quickly cut the head off ISIS and take their oil. And he'll stop illegal immigration by building a wall on our southern border that Mexico will pay for."

You can watch the full 30-second ad here.

Trump is leading national polls by a wide margin, but is locked in a tight battle with Texas Sen. Ted Cruz in the first-in-the-nation caucus state of Iowa.

"I am very proud of this ad," Trump said in the statement. "I don't know if I need it, but I don't want to take any chances because if I win we are going to Make America Great Again."

Trump had already released radio ads in the first three voting states. Other major campaigns and super PACs have already spent millions of dollars on television ads in early states.