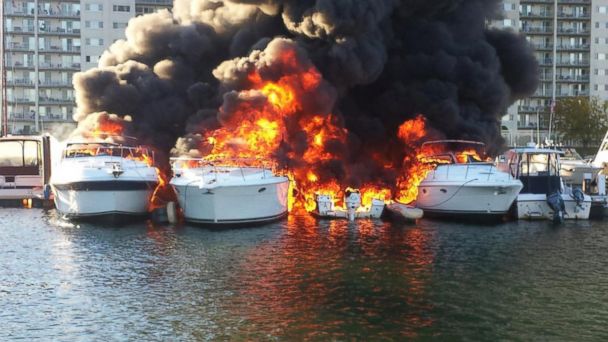 Dozens of firefighters battled a two-alarm fire that spread across at least five boats at a marina in Quincy, Massachusetts, this morning, according to the Quincy Police Department.

The fire was first reported at 7:24 a.m. at the marina, where several people live on boats docked there, a Quincy Police spokesman told ABC News. The fire was finally contained about an hour later, and no injuries have been reported, he said.

Police marine units were able to tow and save five other boats next to the ones on fire, the spokesman added.

One boat may have sunk, and gasoline in the water is now being evaluated for cleanup by the Coast Guard and the Massachusetts Environmental Police, the spokesman said. He added that officials are still investigating the cause of the fire.

"This was a particularly difficult fire to fight because there was only one pier leading down to the boats, and firefighters needed to get a line from the land down to the end of the dock because the boats on fire were at the very end," the Quincy police spokesman said.

Firefighters were still hosing down smoking boats this morning after the fire was put out to prevent another blaze from igniting, police said.