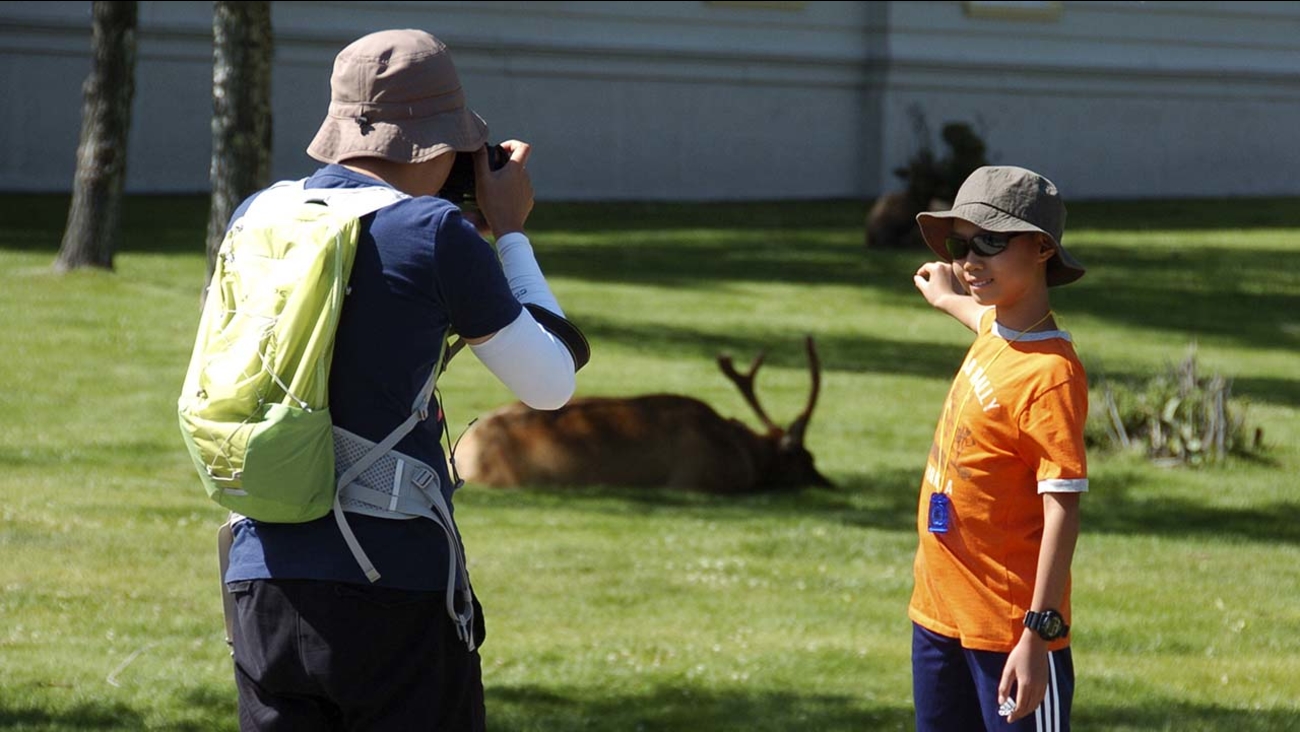 YELLOWSTONE NATIONAL PARK, WY -- Tourist John Gleason crept through the grass, four small children close behind, inching toward a bull elk with antlers like small trees at the edge of a meadow in Yellowstone National Park.

"They're going to give me a heart attack," said Gleason's mother-in-law, Barbara Henry, as the group came within about a dozen yards of the massive animal.

The elk's ears then pricked up, and it eyed the children and Washington state man before leaping up a hillside. Other tourists - likewise ignoring rules to keep 25 yards from wildlife - picked up the pursuit, snapping pictures as they pressed forward and forced the animal into headlong retreat.

Law enforcement records obtained by The Associated Press suggest such problems are on the rise at the park, offering a stark illustration of the pressures facing some of America's most treasured lands as the National Park Service marks its 100th anniversary.

From Tennessee's Great Smoky Mountains to the Grand Canyon of Arizona, major parks are grappling with illegal camping, vandalism, theft of resources, wildlife harassment and other visitor misbehavior, according to the records obtained through a Freedom of Information Act request.

In July alone, law enforcement rangers handled more than 11,000 incidents at the 10 most visited national parks.

Often the incidents go unaddressed, such as when Gleason and the children approached the bull elk with no park personnel around. Gleason said he was "maybe" too close but felt comfortable in the situation as an experienced hunter who's spent lots of time outdoors.

"It's more like going to a carnival. If you look at the cumulative impacts, the trends are not good," said Susan Clark, a Yale University professor of wildlife ecology who has been conducting research in the Yellowstone area for 48 years. "The basic question is, 'What is the appropriate relationship with humans and nature?' We as a society have not been clear about what that ought to be, and so it's really, really messy and nasty."

- A Canadian tourist who put a bison calf in his SUV hoping to save it, ending with wildlife workers euthanizing the animal when they could not reunite it with its herd.

- A Washington state man killed after leaving a designated boardwalk and falling into a near-boiling hot spring.

The flouting of park rules stems from disbelief among visitors that they will get hurt, said Yellowstone Superintendent Dan Wenk. "I can't tell you how many times I have to talk to people and say, 'Step back. There's a dangerous animal,' and they look at me like I have three heads," he said.

Inconsistent record keeping, including a recent switch to a new criminal offenses reporting system, makes it difficult to identify trends that apply uniformly across the major parks.

But the records reviewed by the AP reveal the scope of visitor misbehavior is huge. In Yellowstone, administrators and outside observers including Clark say the park's problems have become more acute. That threatens its mission to manage its lands and wildlife "unimpaired" for future generations.

Beyond incidents that lead to citations are many more that result in warnings. More than 52,000 warnings were issued in 2015, up almost 20 percent from the year before.

Washington state resident Lisa Morrow's son was among the children Gleason led toward the elk. Despite safety advisories - and numerous examples of visitors getting gored by bison, mauled by bears and chased by elk - Morrow declared herself unafraid of the park's wildlife. She said she was eager to see a grizzly up close.

"I want to see one right there," Morrow said, pointing to a spot just feet away. "I'd throw it a cookie."

The top 10 parks by visitation collectively hosted almost 44 million people last year, according to National Park Service figures. That's a 26 percent increase from a decade earlier, or more than 9.1 million new visitors combined at Great Smoky Mountains, Yellowstone, Grand Canyon, Yosemite and the other national parks on the list.

Yellowstone boasts the most large, dangerous carnivores among those parks, but each has its risks. In Rocky Mountain National Park, it's elk that become more aggressive during mating season. In Yosemite, it's towering waterfalls where visitors insist on swimming near the edge. In the Grand Canyon, it's squirrels habituated to humans and sometimes quick to bite an outstretched hand.

"You take a picture of yourself standing 10 feet in front of a bison, and all of a sudden a few hundred people see it, and it's reposted - at the same time we're telling everybody wildlife is dangerous," Wenk said. "They get incongruous messages and then it happens. They get too close, and the bison charges."
Related topics:
wyomingyosemite national parku.s. & worldpark
Copyright © 2021 by The Associated Press. All Rights Reserved.
More Videos
From CNN Newsource affiliates
TOP STORIES