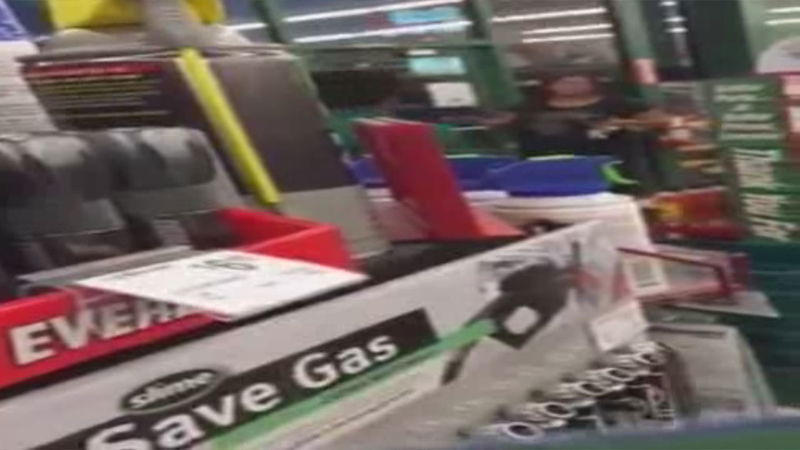 KATY, TX (KTRK) -- A woman was seen on video, saying she wanted to buy antifreeze to poison a stray dog in her neighborhood.

Justin Weynant was working at O'Reilly Auto Parts near Katy when the woman came into the store asking if antifreeze could kill animals.

"The lady walked in, obviously she was pretty upset, and she asked, 'What kind of antifreeze kills animals?" Weynant said.

Weynant tried to tell her antifreeze wouldn't work, but he could not convince her. He used his cell phone to record the interaction.

In the video, Weynant asks, "Are you trying to kill a dog?" The woman answers, "There is a vicious dog that has been on the loose for a whole week and animal control won't get it."

Weynant and his co-worker tried to talk her out of her plan.

When Weynant refused to sell her the antifreeze, the woman said, "You know what, F*** it, I'll go to Walmart. I'm not saying let me poison someone's poodle or annoying Chihuahua. I'm saying this is a vicious German Shepherd on the loose."

Weynant posted the video on Facebook, hoping someone would recognize the woman in the video before anything happened to the animals.

Shawna Majors contacted Eyewitness News, saying she recognized the woman right away and that the dog in question was far from vicious.

"She's a monster," Majors said. "The dog was very afraid. The dog spent time with my 9-year-old daughter."

A few hours after Eyewitness News started asking questions, the woman posted a statement on her Facebook page saying, in part, "The dog was in my neighborhood for well over a week living on my steps. The dog caused damage to my property. That was a snapshot at my most frustrated and when I absolutely had it. Lastly, I never acted on anything and the owner finally came and got his dog."

Neighbors are grateful to Weynandt for posting the video and hope the woman learns a lesson on how to treat animals.
Related topics:
katypet
Copyright © 2021 KTRK-TV. All Rights Reserved.
More Videos
From CNN Newsource affiliates
TOP STORIES