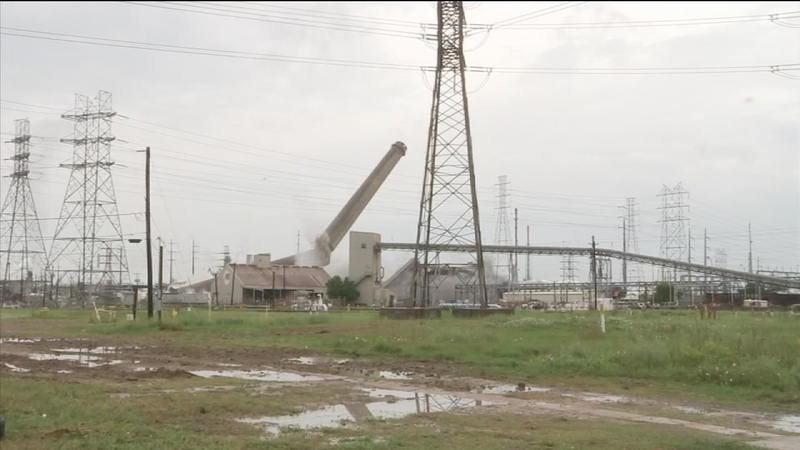 PASADENA, TX (KTRK) -- It took less than 10 seconds to bring down two structures at the old AES Deepwater plant in Pasadena.

The plant is located along Light Company Road near the Houston Ship Channel. The demolition included a chimney and a decommissioned power plant building.

"It was pretty cool, amazing to see the structure go from top to bottom," said Pasadena resident Isaac Vela.

What stood for years came down in seconds this morning in Pasadena not far from Vela's neighborhood on North Blackwell.

"It was like boom, you could feel the ground shake, and when the structure it the ground, it was like a mini-earthquake," Vela said.

Isaac and his neighbors knew the demolition of the plant was happening Sunday at 10. It was announced in advance but there was no countdown.

Elvira Carrillo put earplugs on the little ones and waited.

"It got my heart pumping a little bit this morning," Carrillo said. "I know I'm awake now."

"It was kind of just a shocker, kind of a surprise. I'm glad I had it recording. Glad I had the camera rolling," said resident David Vela.

The 475 foot chimney came down. It was built in 1986. AES says the plant had not been operational for a few years. AES has not said what will happen to the property next, but Isaac says he's ready.

"It's a piece of Pasadena history, gone now. Now it's time to rebuild and new things come in. Out with the old in with the new," said Isaac.

A 475-ft. industrial chimney & adjacent bldg. scheduled for demolition on Sunday 4/12 at 10am. http://t.co/VZXhzduwE5 pic.twitter.com/rmrmcyA2Vg

Police put up barricades on the streets around the plant. They did not want anyone coming out to watch the implosion.