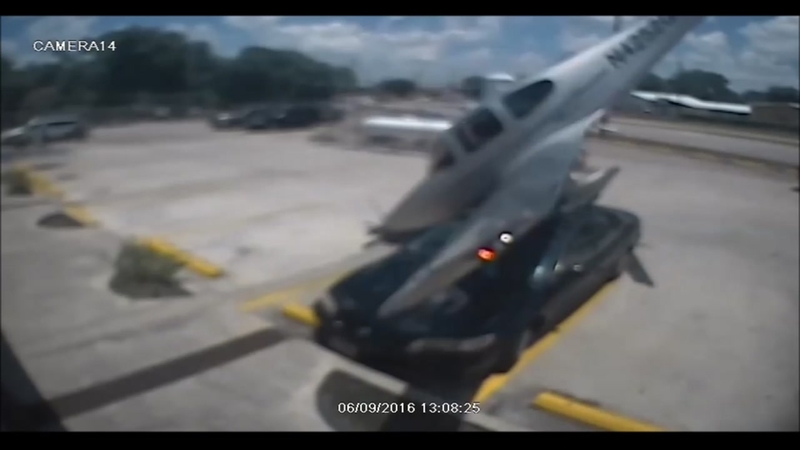 HOUSTON (KTRK) -- Video was just released of a small plane crash near Hobby Airport that killed three members of an Oklahoma family.

"It showed that the aircraft was relatively nose level and relatively wings level spinning counter clockwise to the left at the moment of impact," NTSB Investigator Tom Latson said.

Police in Moore, Oklahoma, have identified the victims as Tony, Dana and Jerry Gray. Dana and Tony were married; Jerry was Tony's brother. They were flying from Norman, Oklahoma, to Houston to visit the brothers' father, who is a patient at MD Anderson Cancer Center, according to a family friend. Dana Gray was the pilot.

The NTSB said the Cirrus SR-20 plane, a fixed wing single-engine aircraft, was en route to Hobby Airport. Gray was trying to land but the plane was too high, so the air traffic controller told them to go around the towers and try again. The air traffic controller also warned about wake turbulence from a nearby 737. During a second attempt, the spokesman said the plane nose-dived into the ground.

Audio released by air traffic control revealed the final moments before the crash: "Ma'am, ma'am, straighten up! Straighten up!"

"I saw the plane. It was going everywhere, all over the place," Navisa Artani said.

Latson said the rocket motor deployed but the parachute never did and it's unclear whether the deployment was before or during the crash. There was no mayday call.

The pilot of the single engine plane that crashed in a parking lot near Hobby Airport had only been certified for two years, according to Federal Aviation Association records.

Dana Gray received her FAA certification for a single-engine aircraft in May 2014.

Aviation consultant Greg Maldonado told Eyewitness News her relative inexperience as a pilot could have played a role in the fatal crash.

Aviation consultant Greg Maldonado is familiar with the type of plane Gray was flying, the Cirrus S-20.

"The air traffic controller was telling her that she was coming in a little high, for an aircraft like a Cirrus SR-20, that aircraft, may have been compensating for wake turbulence in the aircraft and the traffic that was in front of her."

That means the tiny plane was jammed in between two commercial jets in the landing line-up. There is a limit to how close a small plane can get to a big plane without running into strong winds.

A graph from AviationSafety.net shows Gray's plane dropped from about 5,000 feet to about 2,000 feet very quickly before dropping off the map.

An NTSB investigator said the Cirrus SR-20 can fly for five hours on a full tank of fuel. Maldonado thinks that time limit is closer to 3.5 hours.

"The range of this aircraft is about 3.5 hours with a 45 minute fuel reserve, and a trip in that type of aircraft traveling at 155 knots, which is the performance speed of this aircraft, you're pushing that three hour, three and a half hour range," Maldonado said.

The NTSB has not released how many hours of flight time Gray had. According to FAA records, Gray flew the plane as a hobby since 2014. It was not her full time job.

The NTSB is still investigating the cause of the deadly crash.