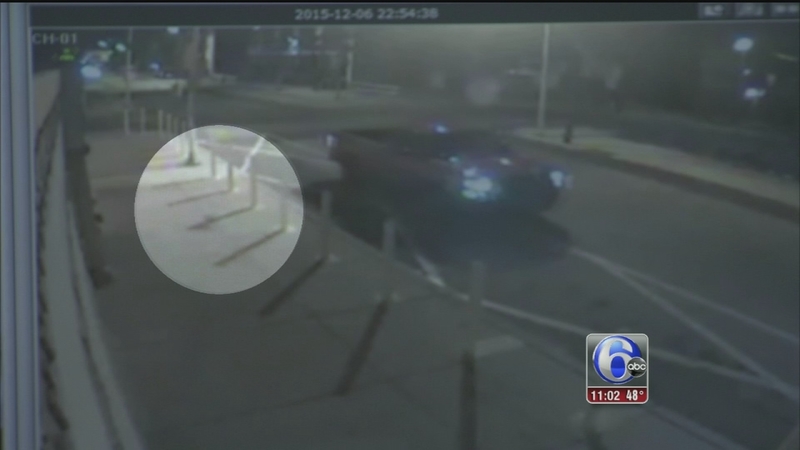 PHILADELPHIA, PA -- The caretaker at a Philadelphia mosque found a severed pig's head outside on Monday morning, and police were investigating whether someone may have thrown it out a car window.

Just before 11:00 p.m. Sunday, the video shows the truck passing by slowly. Then the second time around, footage shows someone in the passenger side tossing what appears to be the severed head of a pig that was found in front of the mosque Monday morning.

The Quran, the holy book of Islam, prohibits Muslims from eating pork, and pigs have been used to taunt or offend Muslims. Last year, attackers in Greece placed a severed pig's head and painted anti-Muslim slogans outside an Islamic studies center in Athens.

"First of all, it scares the community because they're afraid that, God forbid, the next time it could be a bomb instead of the head of a pig," Nabil Khalil, the caretaker of the mosque, said.

Khalil says it is the second incident they have seen.

A day after the Paris attacks, he tells Action News an anonymous caller left a voicemail that said, in part, "I hope you people are happy about what you did in France."

The caller ID captured the caller's phone number from a 610 area code. It has not been determined if the two incidents are connected.

"I said a prayer for the guy. And may God put him on a straight path, because if he was in his right mind, he wouldn't be doing this, because he knows we didn't do it," Khalil said.

In a statement, Mayor-elect Jim Kenney said Philadelphia "has a long history of coming together in the face of challenge. We cannot allow hate to divide us now in the face of unprecedented difficulties. I ask Philadelphians to join me in rejecting this despicable act."

Meanwhile at a neighborhood holiday celebration on Ridge Avenue Monday night, business owners were treating residents to a tree lighting, with food and coats for the needy.

While some said they understand the anger and fear over the deadly attacks in Paris and California, they expressed concern over what happened at the mosque.

"It doesn't make anything better by doing what they did," Sheila Morris of North Philadelphia said.

"I think that some people of the world are sick, and it's a very unfortunate situation," business owner David Simms said.

"It's tragic. It's unnecessary. It makes me sad, and there's a lot of evil and meanness in the world," business owner Harold McCoy said.

The incidents are being investigated, but officials say it's too early to say what charges could be filed if they catch the persons responsible.