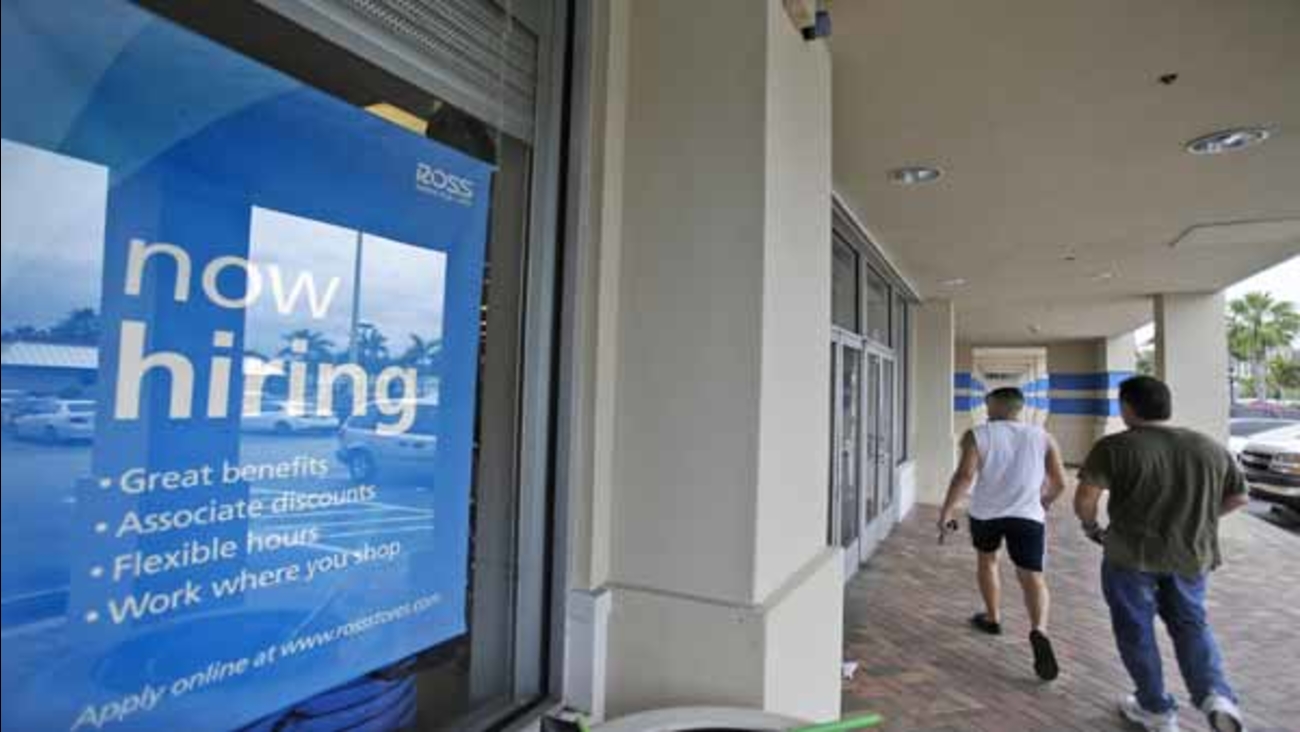 FILE - In this May 16, 2014 file photo, shoppers walk past a now hiring sign at a Ross store in North Miami Beach, Fla. (AP Photo/Wilfredo Lee, File)

WASHINGTON -- Employers added a healthy 255,000 jobs last month, a sign of confidence amid sluggish growth that points to a resilient U.S. economy.

The Labor Department said Friday that the unemployment rate remained a low 4.9 percent in July. More Americans launched job searches, and nearly all were hired. But the influx of job seekers meant that the number of unemployed fell only slightly.

The figures suggest that U.S. employers shook off concerns about Britain's late-June vote to quit the European Union. Nor were they apparently discouraged by tepid growth in the first half of the year of just 1 percent at an annual rate.

Average hourly pay picked up and is 2.6 percent higher than it was a year ago, matching the fastest pace since the recession.

July's robust job gain may be enough to reassure investors - and perhaps Federal Reserve policymakers - that the economy will keep growing at a slow but steady pace. The economy slumped in the first half of this year, with an annualized growth rate of just 1 percent. Growth has been driven by consumers, who ramped up spending in the April-June quarter at the second-fastest pace since the recession.

That figure underscored the importance of strong hiring, which puts more paychecks into more pockets and supports greater spending. Many analysts expect the economy to rebound in the second half of the year, with one of the most optimistic estimates coming from the Federal Reserve Bank of Atlanta: It predicts that annualized growth will reach 3.7 percent in the current July-September quarter.

Public perceptions of the economy have been largely negative during this election season despite low unemployment. A top adviser to Donald Trump said last week that the annual economic growth rate of just 1.2 percent in the April-June quarter was "catastrophic."

Hillary Clinton has tended to credit the Obama administration for rescuing the economy from the Great Recession but has also said "none of us can be satisfied with the status quo."

Overall, most recent economic data have been mixed. Americans are confident enough to step up home purchases, aided by near-record-low mortgage rates. Sales of existing homes reached a nine-year high in June, and sales of new homes accelerated to an eight-year high.

Services companies, which range from retailers to banks to shipping firms, expanded at a healthy pace in July, according to a survey by the Institute for Supply Management, a trade group. Their expansion slowed a bit from the previous month. But new orders picked up, a sign that growth could remain healthy.

But manufacturing continues to struggle and is weighing on hiring. Factories received fewer orders in June for a third straight month. Weak growth overseas and a stronger dollar have cut into many companies' overseas businesses. And auto sales have leveled off, according to data released this week.

The slowdown in manufacturing has cost jobs: Factory employment has fallen about 30,000 in the past year, depriving the economy of key middle-income positions.

Job growth has been stronger in higher-income occupations, such as managers, engineers and accountants. Lower-wage jobs at hotels, restaurants and retail stores have also grown at a healthy pace. Both trends add to a long-running dynamic that has caused hiring for middle-income jobs to lag behind hiring for high- and low-paying positions.

Keep checking back on this page to get real-time updates as this story unfolds. To get alerts for breaking news, download the ABC-13 news app for iPhone or Android. You can also get breaking news alerts sent to you by email.
Related topics:
u.s. & worldunemploymentjobs
Copyright © 2021 by The Associated Press. All Rights Reserved.
More Videos
From CNN Newsource affiliates
TOP STORIES