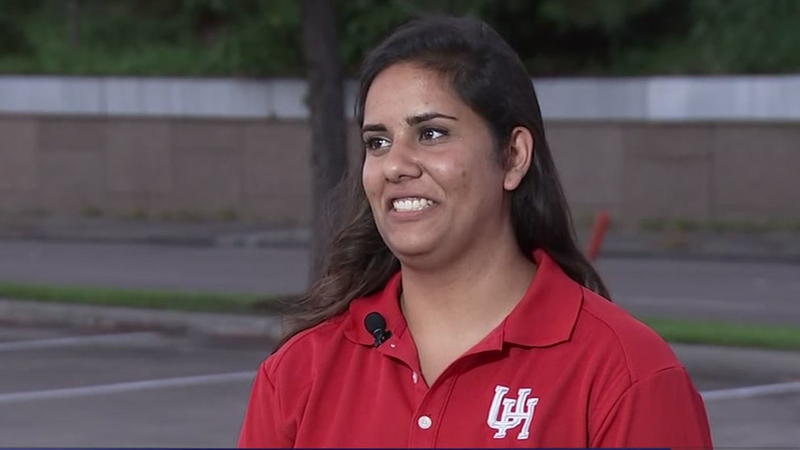 HOUSTON (KTRK) -- Some students at the University of Houston are calling for a student leader to resign after posting a controversial statement related to the Black Lives Matter movement.

Rohini Sethi is the Vice President of the student body at UH. After five police officers were shot and killed in Dallas Thursday, Sethi wrote, "Forget #BlackLivesMatter; more like #AllLivesMatter."

Nala Hughes is one of many students at UH who felt insulted by what Sethi said.

"Just for her to say, 'forget Black Lives Matter,' is a punch in the stomach," Hughes said.

Hughes said she knows all lives matter, but that the deaths of Philando Castile and Alton Sterling highlight a specific problem with how black people are treated in the U.S.

"When I saw it, I was like, 'Ooh I cringed a little, I cringed a lot, actually, because this is a student leader on our campus," Smith said.

Smith and other students are using the hashtag #RemoveRohini on Twitter. They do not think Rohini deserves to keep her office.

Rohini's excuse for an "apology" is completely unacceptable.

"I definitely think the words that I used and the verbiage could have definitely been better," she said. "I'm very sorry to my community and for the emotions and anger and pain that I caused."

Rohini posted the following response to criticism on her Facebook page:

As Student Body Vice President, I was elected to represent the voice of every single one of you. When I took this position, my intention was and still is to advocate for you and make you feel heard. I am a friend to some, a passing face for others but an advocate for all.

Thursday night as our nation recoiled in shock, I took to Facebook and shared in a way that was inappropriate given the context and my position. In that moment, I did not act as your Vice President, I acted, in my own flawed way, as many do when presented with a tragedy from afar. My response has caused enormous pain for many members of our community, and I think it is high time that I clarify my statement.

Visually we are black, white, tan, and a hundred shades between but we are all human, thus I believe that all lives matter. Let's all come together through conversations to reach unity. This is how we begin to set the standards for ourselves and our future, especially in times of adversity.

Our community is the most diverse in the nation, and we should cherish the lessons that it teaches us. I hope to embrace language that binds us together rather than language that singles some out. This is the perfect opportunity for us to rediscover each other, to learn about who we are, and what our experiences have been.

We are stronger working together. We achieve our greatest potential through conversation. Let's create the possibility of a culture rooted in open discussion. For this reason, I'd like to talk to you and hear what you have to say. Join me and let's do this together. http://goo.gl/forms/907WCjK1V68itZTi1

As Student Body Vice President, I stand for compassion, unity, and respect for all. I take responsibility for who I am, what I say, and how we move forward.

"Social media has caused us to speak and communicate things without filters that we might normally have," Salinas said.

Some students accept her response.

"She did say, 'I acted in my own flawed way as many do,' Samuel Tran said. "Which I totally agree, because I make mistakes, too."

After reading the response, Hughes said she understands what Sethi meant better.

"I'm seeing how her thought pattern was, and she didn't actually mean that black lives don't matter," Hughes said.

Other students are still calling for her to resign.