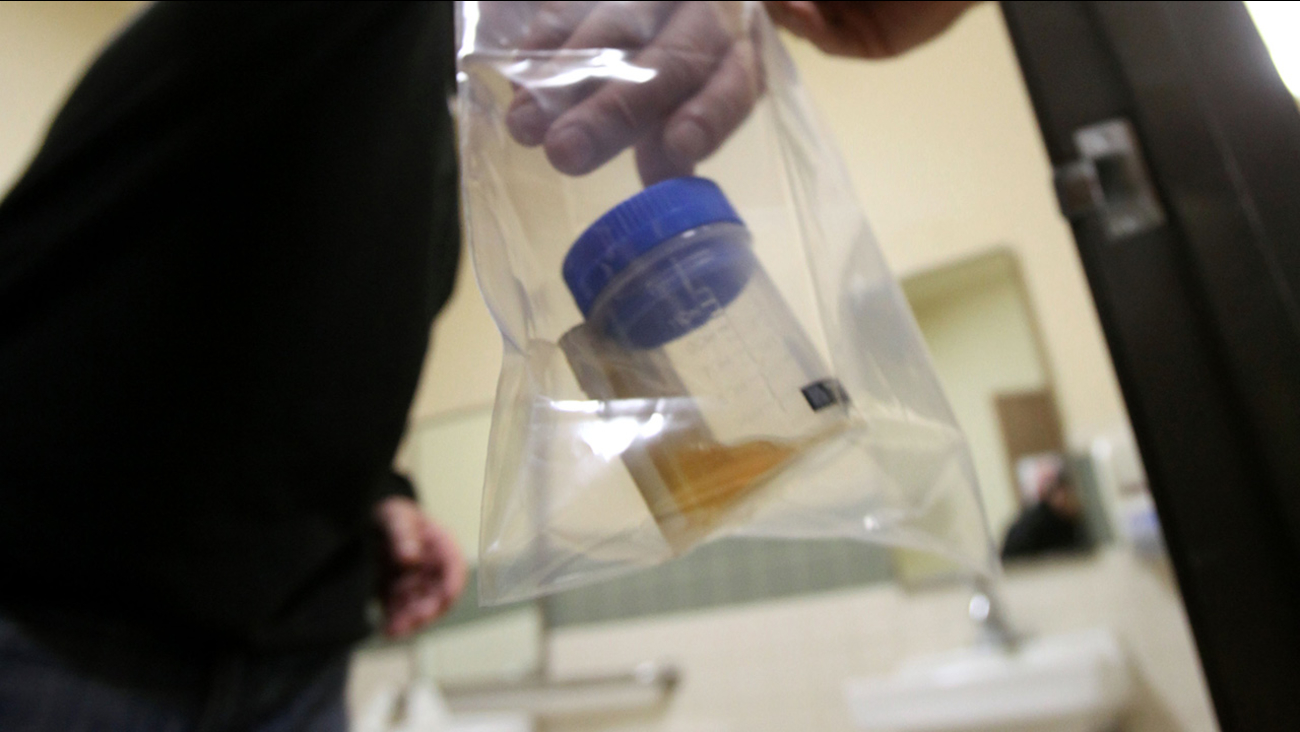 In this photo taken May 19, 2011, a man places a urine sample he has just given for drug testing (AP Photo/Rich Pedroncelli)

KTRK
Should state welfare benefit applicants face a drug screening before receiving support? Texas lawmakers who think so have tried nearly a dozen times in the past eight years to do so, and now, they may have the momentum to pass such a measure, The Texas Tribune reports.

Republican lawmakers are trying to take advantage of a federal provision that would allow them to drug screen applicants and ban those who fail drug tests.

The Texas Tribune, a nonprofit, nonpartisan organization, reports fewer than 63,000 Texans -- 54,247 of them children -- are enrolled in the Temporary Assistance for Needy Families program that provides cash assistance for families struggling to pay for housing, food or utilities. Less than one percent of the state's population is enrolled, as of October.

Texas has some of the strictest eligibility requirements in the country.

"If you're going through this difficult period economically or with job prospects, why in the world are you using controlled substances?" said John Colyandro, executive director of the Texas Conservative Coalition Research Institute, which has long pushed for such a measure. "You're finding financial wherewithal to be spent on illicit drugs that ought to be used for support of your family. That alone creates an imperative to do a screening and testing."

The Texas Tribune notes states including Alabama, Arkansas, Georgia, Kansas, Michigan, Mississippi, Oklahoma, North Carolina and West Virginia already have some form of screenings and drug testing requirements for TANF applicants, according to the National Conference of State Legislatures. But critics have long called such proposals a waste of limited resources that unfairly singles out poor people.

Florida had a law that required urine tests for all TANF applicants, but federal courts threw it out in 2014, citing that it was an invasion of privacy.

Rebecca Robertson, legal and policy director for the American Civil Liberties Union of Texas, said the state could better spend its money on increasing access to drug counseling programs.

"TANF only goes to a very small number of Texans, and those are the neediest people in our state," Robertson said. "There's this (misconception that) we have this large class of people taking advantage of the benefit to support drug habits, and that's not the case."

Among the 12 attempts made by the Legislature in recent years, Senate Finance Chair Jane Nelson, R-Flower Mound, has seen her efforts go farthest, according to records from the Texas Legislative Reference Library. Nelson's previous bills passed the Senate during the 2013 and 2015 sessions. Neither made it through the House.

Nelson filed her latest bill, SB 268, on Dec. 5. If it becomes law, TANF applicants would have to undergo a drug screening and only undergo testing if they're considered at-risk or suspected of drug use. Adult applicants with a felony drug conviction or who previously tested positive for drug use would face mandatory testing.

"Because TANF is a direct cash assistance program, we have a responsibility to ensure that these funds are not being used to support a person's drug habit. More importantly, we should have policies that are discouraging drug abuse rather than enabling it."

Nelson's legislation would disqualify applicants who fail their drug tests from TANF for six months. Another failure after that would mean being disqualified from benefits for a year. They would only be allowed to reapply after six months after having enrolled or completed substance abuse counseling. A third failed drug test would ban them permanently.

To avoid punishing children of TANF recipients for a parent's drug use, the bill allows an applicant's family to still receive benefits through a so-called protective payee who would accept the cash assistance. Nelson's office says her bill is modeled after Michigan's law.

Rep. Ken King, R-Canadian, recently filed the companion House bill, HB 436. His office did not return comment by time of publication with the Texas Tribune. This will be his third attempt with this type of legislation.

Nelson's and King's bills would give positive drug testers information on substance abuse programs in their area, but the legislation does not include funds that would help pay for those programs.

Making a change like this to a program like TANF can take multiple sessions for a Legislature to pass, said Colyandro, who added that the legislation for the upcoming session better weeds out applicants who may have medical prescriptions for certain drugs versus others who use cocaine or methamphetamine. The drug screening, he said, helps make "the administering of the program more fair to the beneficiary and more defensible from a state position."

But Robertson pointed out that the Texas proposal would use TANF funding to help pay for the drug tests.

"That's money that can't be used by parents to support kids," she said.

Heather Hahn, a senior fellow in the Center for Labor, Human Services, and Population at the Washington, D.C.-based Urban Institute, said Texas legislators will need to consider how to implement this requirement in a practical and appropriate way, particularly since other states have spent lots of money on testing only to uncover little drug use.

Hahn said welfare office workers in Texas would likely need training to understand what they should look for but warned that that could feed into larger issues such as racial bias. She said people of color applying for welfare benefits often report feeling demeaned or suspect prejudice when asking for help.

"It's good that in this law that they're doing a screener first and not straight to drug testing," Hahn said. "First of all, it's expensive to test everybody, so it's good to do a screener first, and then I see in Texas' proposal that the state would pay for the test. That's another issue that's been a challenge in other states, is the cost of the test for people who are already poor."
Related topics:
illegal drugstexas newsstate politicswelfaredrugpoliticsdrugs
Copyright © 2020 KTRK-TV. All Rights Reserved.
More Videos
From CNN Newsource affiliates
TOP STORIES