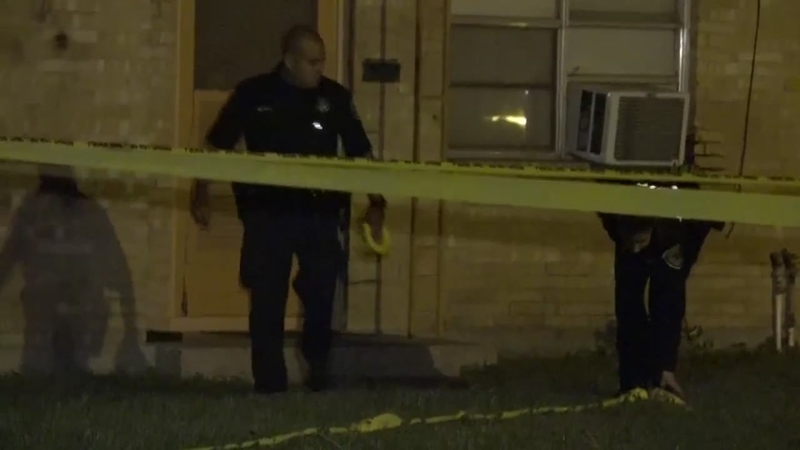 What police say was an argument over their two-year-old daughter ended with Dominique Tibideaux dead late Monday night, and her ex-husband, Lloyd Gipson Carter behind bars.

"At some point during the argument, the ex-husband pulled out a gun and began to chase his ex-wife. He chased her into her mother's apartment and shot her, close range," said HPD Detective Latonya Bailey.

One friend tells Eyewitness News that Tibedeaux was selfless and loving. That friend says the last time they spoke, Tibedeaux told her Carter was "crazy," but that she and their baby had moved out and were OK.

She was found in her mom's doorway.

A few miles away on Wileyvale near Crosstimbers, a man and woman were found shot in their master bedroom late Tuesday morning.

"It was an adult child that was contacted to come to the residence because there was not any response in trying to make contact with them on the phone," says Det. Brian Evans. "Upon her arrival here, she couldn't make access into the home."

Det. Evans says they believe a man shot his wife inside their home on and then killed himself.

"They seemed like they were in love," said their neighbor Joyce Ward. "Like he was a perfect gentleman -- when he'd leave and go to work, he'd give her a kiss. He kept her van up."

But the numbers suggest looks can be deceiving. According to stats from the Texas Council on Family Violence, 132 women were killed by a male intimate partner in Texas last year. Twenty-three were in Harris County and 43 of those women had ended the relationship.

"Survivors, a lot of times do the best they can to try to stay safe in this situation," said Celinda Guerra. "Whether they choose to stay in the relationship or leave the relationship."

Celinda Guerra is with the Houston Area Women's Center. She tells us one of the keys to keeping domestic violence from escalating to the level we've seen in just the last 24 hours is to know what to look for.

"Certainly there are problems within relationships. But what's abuse and what's 'maybe we're not agreeing today?' Also if the abuse is getting worse, if it's happening with more frequency, if that person is getting more aggressive, those are certainly red flags as well," said Guerra.

Lloyd Carter, the suspect in the murder on East Lockwood is being held on $200,000 bond.