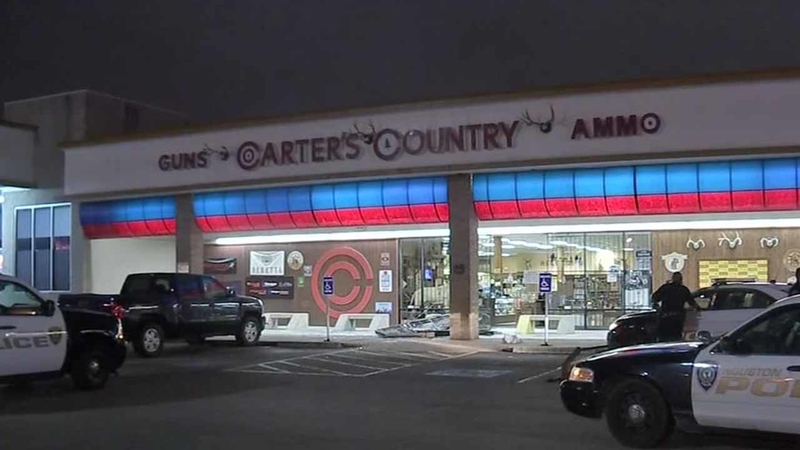 HOUSTON (KTRK) -- A smash and grab crew of thieves emptied display cases and a wall of rifles Tuesday morning at Carter's County. Houston police say as many as ten suspects raided the store and got away with at least 50 weapons. The amount of weapons is not counting those they dropped in their haste to get out before police arrived.

A large pickup truck rammed a plate glass window. A chain was used to pull out burglar bars. A wall display of rifles was empty when HPD arrived.

Carter's County is a federal firearms licensee, or FFL. Authorities say thefts and robberies at FFL's are increasing.

"We're seeing an uptick, not just in Houston and Harris County, but around the country," said Robert Elder, Special Agent In-Charge at Houston's ATF offices.

The size of the burglary crew was unusual, even to Elder.

Some weapons were recovered at subsequent crime scenes, after they changed hands for cash. Oddly enough, Elder said, a lot of the guns reported stolen in Houston never leave the city.

"Some have been found at homicide scenes," he said.

"You've got a criminal element that needs firearms to commit their crimes, sometimes associated with the drug trade or robberies," Elder added. That can also include cartel gangs.

Surveillance video was recorded at the store, which should provide clues about the suspects. A single pickup truck couldn't hold ten people, so it's believed another vehicle may have been involved.

The video will be made public. A Crime Stoppers reward will be posted for information leading to the arrest and conviction of those involved.