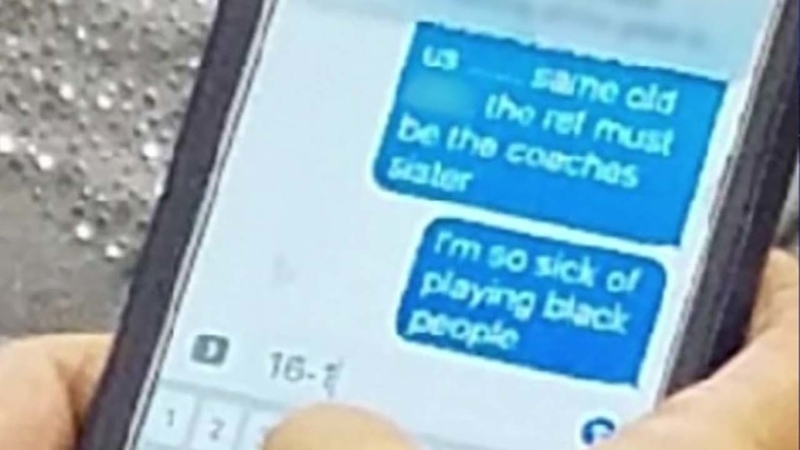 HOUSTON (KTRK) -- A teacher in Humble ISD has resigned after a picture of a racially insensitive text message she sent circulated on social media.

The text read, "I'm so sick of playing black people."

A woman in the stands for a girl's basketball game between Kingwood High and Nimitz High (Aldine ISD) sent the message to someone. A Nimitz parent saw it and whipped out her phone to take a picture.

We've learned the woman who sent the text was a teacher at Greentree Elementary School. The parent who took the picture of the text sent it to Houston-area activist Gerry Monroe, who took his concerns to Humble ISD.

"If you want to say things or convey messages like that, then you have to realistically not allow it to become public because words are like bullets. Once you shoot them, you can't take them back," Monroe said.

"Humble ISD expects educators to show respect for all students and to demonstrate good sportsmanship at student events," the district said in a statement. "The text message does not represent the values of the district."

"I've seen people do foolish things in the public thinking it was being done privately," said attorney and ABC13 legal analyst Joel Androphy.

The big question is whether the picture that led to this teacher's resignation was an invasion of her privacy. Androphy said absolutely not.

"If you're outside your house then you say things at your own risk that you can be held accountable for," he explained. "If I'm at a football game and I'm texting my family and the guy behind me looks to see what I'm doing, it's my fault for exposing it there."

ABC13 went to the teacher's house to get her side of the story. Her husband said they're not a racist family, and they don't raise their kids that way.

"She is devastated that her comment on the text has hurt people. She feels that what she said by hurting the kids and families was absolutely wrong and she apologizes for her comments," he said.

"She has no business teaching children if she's going to be like that," Dubois said.

Humble ISD expects educators to show respect for all students and to demonstrate good sportsmanship at student events. The text message does not represent the values of the district. Upon being made aware of the photo, the district took immediate action by investigating. That investigation revealed that a person employed as an elementary school teacher sent the text. She has resigned.