Portraits of the 17 victims of the Florida school massacre 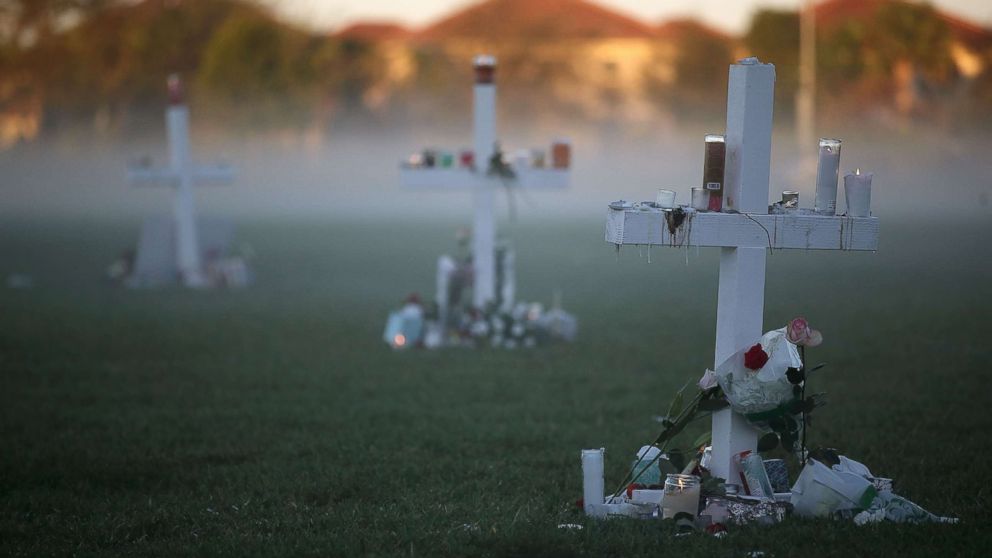 From a beloved football coach to college-bound high school seniors, 17 people lost their lives in a mass shooting at a South Florida high school Wednesday.

More than a dozen others were injured in the Valentine's Day rampage at Marjory Stoneman Douglas High School. The suspect, a former student, was arrested.

Here is what we know about the 17 victims:

Teacher Scott Beigel died while saving others, according to student Kelsey Friend.

"When he opened the door, he had to re-lock it so we can stay safe. And he didn't get the chance to," Friend said, noting that her teacher was lying on the floor.

"I'm so thankful he wasthere to help everybody," she added.

"She was a smart, loving, caring, and strong girl who brightened any room she entered. She will be missed by our family for all eternity," the post said.

"The family is heartbroken and devastated to have lost Nicholas," the family of Nicholas Dworet said in a statement. "He was a happy young man full of joy and life."

"He was extremely passionate about swimming," the family said, and "Nicholas was thrilled to be going to University of Indianapolis to join their swim team. He dreamed of making the Olympic swim team and going to the 2020 Olympics in Tokyo. He believed he could accomplish anything as long as he tried his best."

Robert Manuel, president of the University of Indianapolis, where Dworet would have attended this fall, said in a statement, "Nick's death is a reminder that we are connected to the larger world, and when tragedy hits in places around the world, it oftentimes affects us at home. Today, and in the coming days, I hope you will hold Nick, his family, all of the victims, as well as the Parkland community and first responders in your prayers."

Dworet's brother "was also a victim of the shooting" and is "recovering at home," the family said.

Athletic director and head wrestling coach Christopher Hixon was among the victims.

"If you needed anything -- a cup of sugar in the middle of the night, he would bring it to you," Coral Springs High School athletic director Dan Jacob told ABC News. "Chris has a son with Down syndrome. He put needs of everyone else before his own."

"Coach Hixon, for me, was a father figure," said wrestler Karlos Valentin, the Sun Sentinel reported. "His loss was just terrible."

"He was such a sweet guy," wrestler Ray Corniel said, according to the newspaper. "He would bring us food for all our tournaments and take care of us like we were his own children and just watch over us, let us learn about life lessons."

Jaime Guttenberg, 14, was among the dead.

Her father, Fred Guttenberg, was overcome with emotion as he spoke of her death at a place where "she was supposed to be safe."

"My job is to protect my children," Guttenberg said at a vigil Thursday, his voice cracking. "And I sent my kid to school."

"In the morning sometimes things get so crazy, she runs out behind and she's like, 'I got to go, Dad, bye.' And I don't always get to say, 'I love you,'" Guttenberg said at the vigil. "I don't remember if I said that to Jaime yesterday morning."

"Jaime was such a special kid. All of the kids here are. What is unfathomable is Jaime took a bullet and is dead," he said, his voice trembling. "I don't know what I do next. My wife is home. We are broken. But I can tell you -- don't tell me there is no such thing as gun violence."

To the parents, he said, "love your kids, hold your kids, kiss your kids. And don't ever, ever miss the chance to tell them how much you love them."

Martin Duque Anguiano, a 14-year-old freshman, was among those killed. His older brother Miguel, who graduated from the same school last year, wrote on Instagram, "Words can not describe my pain. I love brother Martin you'll be missed buddy. I know you're in a better place."

"When Aaron Feis died ... he did it protecting others, guarantee that because that's who Aaron Feis was," Israel told reporters. "He was one of the greatest people I knew. He was a phenomenal man."

The sheriff described Feis as a beloved football coach who was well-known in the local community.

"I coached with him. My two boys played for him," Israel said. "The kids in this community loved him, adored him."

Ryan Mackman of West Palm Beach said he grew up in Parkland and graduated with Feis from Marjory Stoneman Douglas High School in 1999.

"I never thought something like this could happen," Mackman, now 37, told ABC News Thursday. "The whole community is just stunned."

Mackman said he heard from other former classmates who were close with Feis that he was apparently shot while shielding students from the spray of bullets.

"He was always a really good guy," Mackman said. "But the fact that he died saving lives, the guy's a hero. There's no two ways about it. He was always a giving guy, he was always there for people, he had a big heart. That showed all the way to the end."

The school's football team wrote on Twitter, "He died a hero and he will forever be in our hearts and memories."

Alyssa Alhadeff, 14, was among the dead, said her older cousin, Ariella Del Quaglio, who wrote on Facebook, "My heart is broken."

Her mother, Lori Alhadeff, with tears on her face, made an emotional plea in an HLN interview Thursday, urging action. "President Trump, please do something! Do something. Action! We need it now! These kids need safety now!" she said.

"How do we allow a gunman to come into our children's school? How do they get through security? What security is there?" Lori Alhadeff screamed. "The gunman -- a crazy person -- just walks right into the school, knocks down the window of my child's door and starts shooting. Shooting her! And killing her!"

Alhadeff was laid to rest on Friday. Her soccer teammates were among those at her funeral.

Meadow Pollack, 18, "was a beautiful girl, inside and out," her cousin, Jake Maisner, said, according to The Sun Sentinel.

Pollack was the youngest of 10 grandchildren, Maisner said.

"She was the baby of the family," he said, according to the Sentinel. "Everyone wanted to protect her."

Pollack had been accepted to Lynn University in Boca Raton, according to ABC affiliate WPLG.

"Meadow was a lovely young woman, who was full of energy," said university spokeswoman Jamie D'Aria, according to WPLG. "We were very much looking forward to having her join our community in the fall."

Joaquin Oliver, who was born in Venezuela, became a proud United States citizen in January of 2017, WPLG reported.

WPLG said his last social media post was to his girlfriend. "Thank you lord for putting a greater blessing than I could ever imagine into my life this past year," he wrote. "I love you with all my heart."

Cara Loughran, a freshman, was killed in the massacre.

"I never got to say goodbye to her," Loughran's friend, Mackenzie Mirsky, told WPLG. "She was such a sweet girl."

"I can't close my eyes without thinking of my friend," Mirsky said.

Peter Wang's friend, Gabriel Ammirata, said in a statement, "I've known him ever since he's moved from China in the 3rd grade." The boys, who had been friends since middle school, bonded over anime movies.

The day of the shooting, Ammirata said, "I knew his fourth-period class was in the freshman building. When I got out I texted him and I did everything I could to contact him but I got no answer. I got sent on a bus to the Marriott as did every other student. Once I was done at the Marriott, I went home then later met up with his family."

"I saw his mom, dad and little brother as well as little cousin at the Marriott," Ammirata said. "Later in the evening two of his older cousins came. ... We went to two hospitals to check if Peter was there."

Fifteen-year-old victim Luke Hoyer was "an amazing individual," said his cousin, Grant Cox, according to CNN. "Always happy, always smiling. His smile was contagious, and so was his laugh."

Relative Mary Beth Stroud-Gibbs wrote on Facebook, "Our whole family is devastated by this senseless shooting that our young Luke lost his precious life."

"Luke was a precious child, who just went to school yesterday not knowing what was to come," she said. "We now need all of your prayers for acceptance of this tragedy, understanding and healing our broken hearts."

Freshman Alexander Schachter was a talented trombone and baritone player in his high school marching band and orchestra, said Alexander Kaminsky, the school director of bands, the Sun Sentinel reported.

"The improvement I witnessed from him was admirable and inspiring," Kaminsky told the newspaper. "I felt he really had a bright future on the trombone."

Schachter's mother died at an early age and his older brother survived the shooting rampage, the newspaper said.

Of Schachter's father, Kaminsky said, "I know this was devastating for him."

"Helena was a smart, kind hearted, and thoughtful person," who would have started college next year, relative Curtis Page Jr. wrote on Facebook.

"She was deeply loved and loved others even more so. Though she was some what reserved, she had a relentless motivation towards her academic studies, and her soft warm demeanor brought the best out in all who knew her," he wrote. "She was so brilliant and witty, and I'm still wrestling with the idea that she is actually gone."

Alaina Petty was "a vibrant and determined young woman" who "loved to serve," her family said in a statement, according to the South Florida Sun-Sentinel.

Alaina participated in the high school Junior Reserve Officers' Training Corps (JROTC) program and volunteered for a program with The Church of Jesus Christ of Latter-day Saints, the family said, according to the newspaper.

Alaina helped rebuild areas of Florida after the state was hit by Hurricane Irma in September, the family said, adding, "Her selfless service brought peace and joy to those that had lost everything during the storm."

"While we will not have the opportunity to watch her grow up and become the amazing woman we know she would become, we are keeping an eternal perspective," the family said, according to the newspaper. "We are grateful for the knowledge that Alaina is a part of our eternal family and that we will reunite with her."

Carmen Schentrup "was dedicated and accomplished" and "was going to change the world," her parents said in a statement according to a post on her brother's Facebook.

"She was quite literally a 'straight A' student and a National Merit Finalist (Carmen never knew this. Her award letter arrived the day after she died)," the statement said. "Earlier this month, she was accepted into the University of Florida Honors program and was exuberant to begin her college experience. She wanted to become a medical scientist and discover a cure for horrible diseases, like ALS."
Report a correction or typo
Related topics:
abc newsnational
Copyright © 2020 ABC News Internet Ventures.
More Videos
From CNN Newsource affiliates
TOP STORIES