TDCJ: 'Several mistakes' made when tear gas was shot in jail dorm room 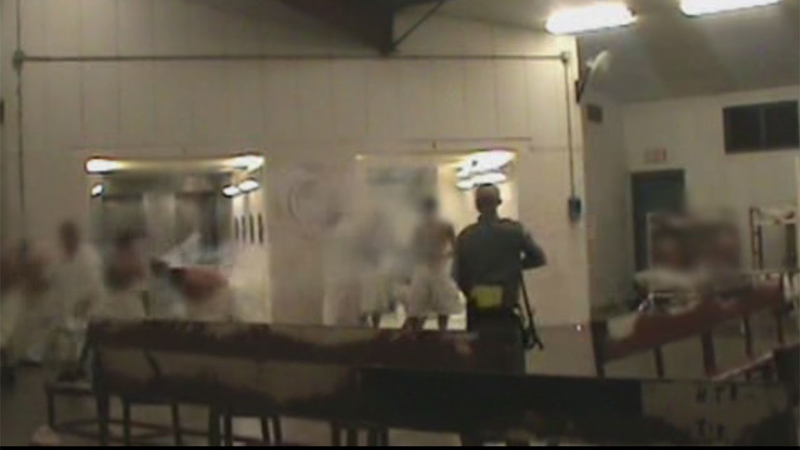 HOUSTON (KTRK) -- A corrections supervisor fired a canister from a tear gas rifle inside a Lychner State Jail dorm at a crowd of inmates at short range, hitting an inmate in the shoulder and sending him to the hospital for burns and other injuries, according to records and interviews.

A video obtained by Ted Oberg Investigates shows the incidents leading up to the shot as well as the canister being fired from the tear gas gun into a crowd of largely motionless inmates, hitting one with a shower of sparks.

The Texas Department of Criminal Justice's initial review of the incident, in which Lt. Cody Waller fired the canister on May 19 soon after 11:20 p.m., "revealed several mistakes," TDCJ officials told ABC-13.

Among those mistakes: That canister fired at the inmates is designed for outdoor use, not inside a dorm and that any "chemical agents should have been administered through the door rather than in the middle of the housing area," TDCJ officials said.

Waller was put on a 10-month probation on July 8 but kept on the job at the Humble-based facility.

Waller was moved to desk duty after ABC-13 began asking questions this week -- and around the time ABC-13 said it had received a video of the incident from a whistleblower.

A corrections officer who works at the jail told ABC-13 that he thought Waller's punishment was too light and said that his colleague acted in poor judgment.

"You have right and you have wrong, and this is definitely wrong," said Eldrick Brass. "This type of behavior is unacceptable."

Brass wasn't on duty that night and was recently demoted due to ersonnel issues. But he said this incident was out of bounds, and doesn't follow policy which certainly doesn't condone firing canisters at inmates.

"Two groups of offenders displayed aggression towards each other and refused orders to return to their bunks in a housing area," the statement reads in part. "After numerous orders were issued and many offenders failed to comply with instructions, authorization was given to use chemical agents to prevent the disturbance from escalating further."

One can see a group of inmates seemingly squaring off for a fight along racial lines, with black inmates on one side of the jail dorm and Hispanic inmates on the other.

Apparently, the Hispanic inmates wouldn't get in their beds for lights out an hour earlier.

Waller was on duty and in charge and looks into the camera.

"I will warn them twice and then use a chemical agent," he is recorded as saying.

Waller and other staffers walk right through the inmates. They are clearly not being aggressive to the guards.

You can hear some of the threats in the run up to gas being fired.

"We'll whoop you," shouts one of the African-American inmates off-camera.

No guard moves to stop the threats, the video shows.

The video also shows the Hispanic inmates ignore Waller's orders to "rack up" but then comply with his order to move away from the door.

Then with the group of Hispanic inmates cornered but not fighting, Waller is seen firing his tear gas rifle into the crowd.

Sparks fly when the tear gas canister -- slightly larger than a stick of butter -- hits an inmate in the chest.

"A Lieutenant at the unit entered the housing area and administered chemical agents through a single shot delivery system," according to the TDCJ statement. "An offender was struck by the cartridge and suffered minor injuries."

As far as that inmate, "He was transported to a local hospital for treatment and returned to the unit the following day," the TDCJ statement reads.

The full TDCJ statement can be found here.

"It wasn't warranted," Brass said. "You clearly see the offenders are not being aggressive; they're not cursing at staff, they're not doing any of that.

The correction officers could have removed the inmates from general population, according to Brass.

"They were willing to take the gas rather than take the beating," Brass said. "They were afraid."

The whole incident isn't shown on the video, TDCJ officials said. The gas was used to "prevent the disturbance from escalating further," according to the statement.

Bill Habern, a Houston attorney who has repeatedly fought legal battles with the TDCJ, also viewed the video.

He said he isn't convinced based solely on the video that what he saw was excessive force.

"I don't know what the instigating issues were and I don't know the dangerousness that those instigating issues posed to the unit," he said. "Certainly it appears to be a race-related issue, which the prison has very little control over because the courts have ruled that you've got to integrate. It may've been a situation about to get to violent.

Still, Habern said he is unclear why the guard pulled the trigger when he did.

"I think the shooting of the gas can at that time was a little premature," he said.