PRAIRIE VIEW, TX (KTRK) -- A Prairie View A&M University soccer player who posted to Snapchat in blackface is no longer on campus.

Monday, university president George C. Wright met with more than 400 students and faculty in a forum he called as a response to the viral post. He announced that Brooke Merino is back home with her family in California, at least temporarily.

He also read a letter from Merino to the student body in which she says she had no idea what the term blackface meant before her post went viral, apologizing several times. She says she meant her post as a joke.

"I'm not condoning her actions, but none of you were there when the picture went viral, and she was shaking in fear and anxiety because she had realized what she'd done," her teammate Braelah McGinnis said to the packed room during Monday's forum.

Merino sparked outrage among her teammates and across campus. Students said they weren't only upset with the black tape on her face, but with the caption "When you just tryina fit in at your HBCU." 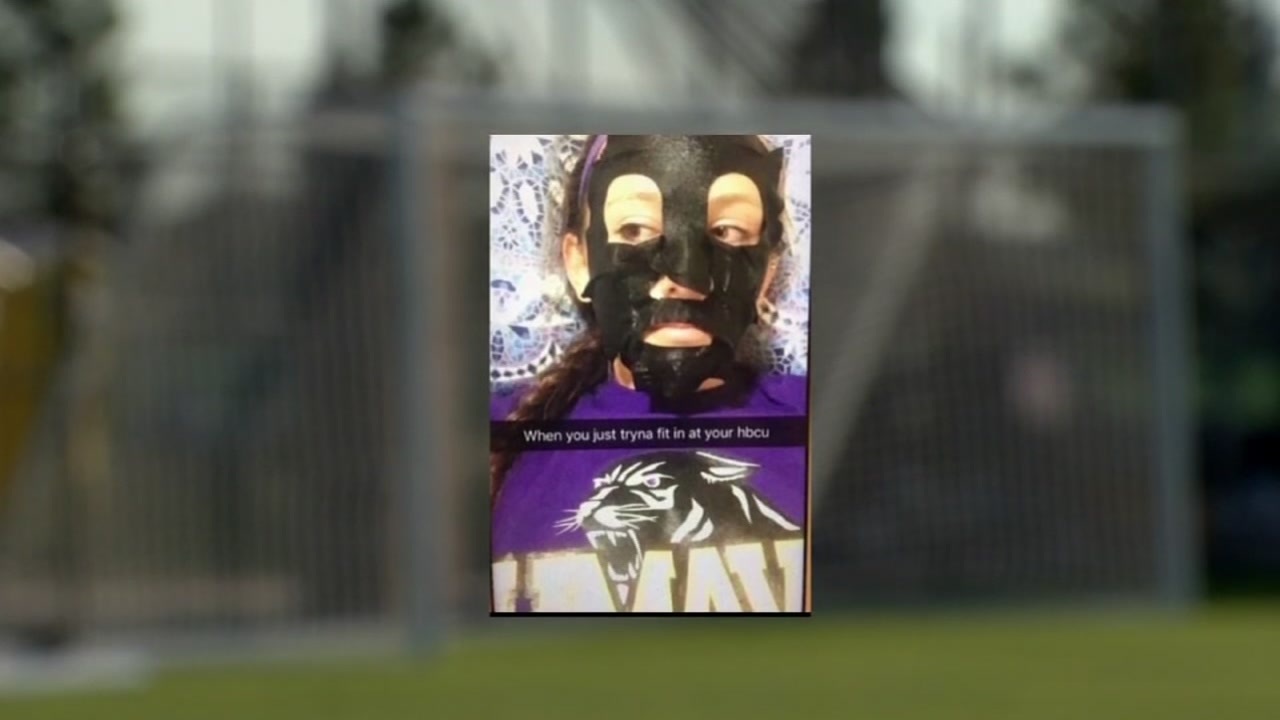 Prairie View A&M student under fire for "blackface" Snapchat post
A Snapchat gone wrong landed a Prairie View A&M soccer player in hot water. In the post, the player poses with her face covered in black tape. The caption on the picture says, "When you just tryna fit in at your HBCU."

Merino wrote a letter of apology to the soccer team. University President George C. Wright said her family asked him to read the letter publicly at the forum.

"Being here, I have felt what it is like to be a minority, and I have felt uncomfortable. I have felt out of place. But, I knew that was going to be part of this journey of going to an HBCU as a white Hispanic student," the university's president read.

Merino also wrote: "I will admit that I was ignorant in my post. I was stupid for posting it without thinking more clearly about the consequences. But I'm not racist."

"To me, it disrespected everything this university was built for, everything it stands for. Not just Prairie View, but other HBCUs," J'Neia Stewart, a senior, said.

Some students questioned the outrage.

"Let's be real. You listen to rap. You listen to people say what they wanna say every day. They will say the n-word. They will say the b-word," said 41-year old transfer student Tiffany Latin. "They do all kinds of stuff, and as African-Americans and minorities we accept it when it comes from us. But how dare anyone from a different race or ethnicity, or not from our neighborhood, say or do something that offends us."

Still, others defended the outrage.

"When you have officers and police brutality and stuff like that going on outside of campus, when you come onto campus you want to feel like you're home," Davon Reid, a junior, said.

Brooke Merino is home with her family while they decide whether she'll leave the school or come back. J'Neia Stewart says there's one way she'd be welcomed back.

President Wright said the challenge now is where the university goes from here.