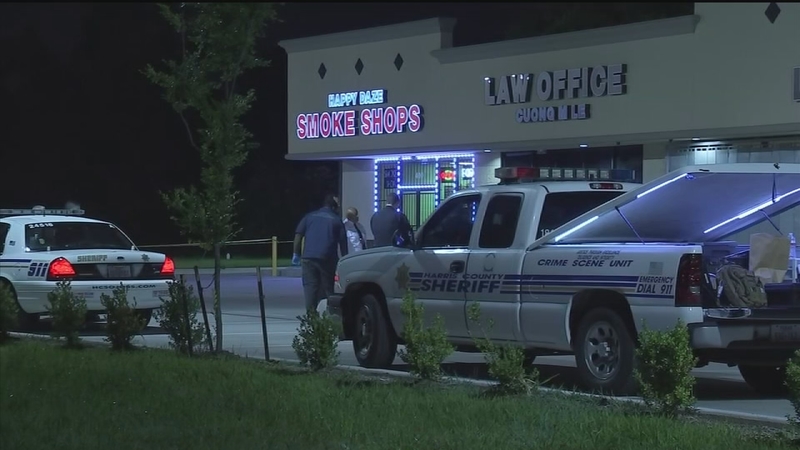 HOUSTON (KTRK) -- A local store clerk fought back and now a would-be crook is dead. His accomplices are on the run.

Armed with guns and wearing masks, police say three men tried to hold up a smoke shop on Antoine early Tuesday morning. What they didn't know is the clerk was also armed.

What felt like an eternity, in reality took no more than thirty seconds.

"They pulled in. They made a U-turn and they parked right there and he heard them yelling, 'Go, go, go,'" said the store owner, who didn't want to be identified. "When they opened the door, they had their mask on and everything."

Armed and masked, the three suspects stormed their way in to the Happy Daze shop around 10pm. The store owner told us what happened when his clerk came face to face with the gunmen.

"He kind of had the instinct of what to do what was going on," said the shop owner.

He says his clerk immediately reached for his pistol as the gunmen went in. One of the men then pointed his weapon at the clerk, who in turn fired three shots.

"They ran in. They stepped two yards into the store and he discharged his weapon hitting the guy, And the guy stumbled out," the store owner added.

Harris County deputies say the injured suspect collapsed in the parking lot as he attempted to get in the getaway car. He died on the scene.

Hours later, the owner was left picking up the pieces of a window shattered by bullets, relieved neither his clerk or his customers were injured in the ordeal, but frustrated, too, saying the suspects should have never tried to take the easy way out.

"We hate to see any of that happen. We are just out here trying to make a living and it sucks when somebody comes and tries to take it from you when you are out here working for it," he said.