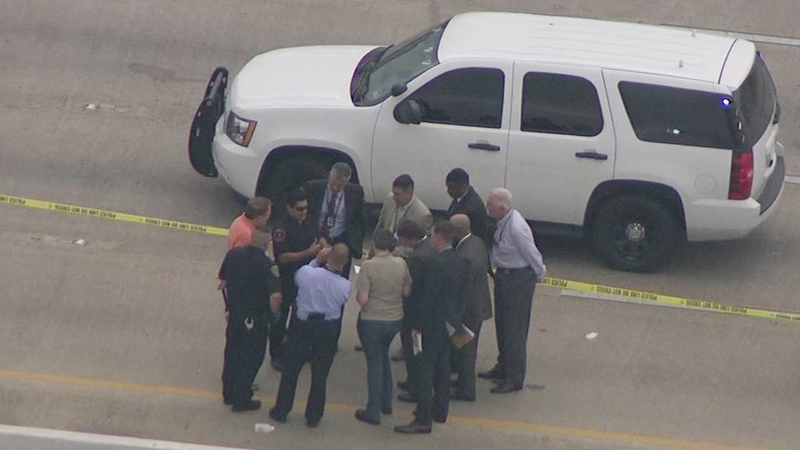 HPD spokesman Kese Smith says a Precinct 5 deputy was notified by dispatch that a car near him had several toll violations, so the officer tracked it down and pulled the driver over.

A suspect was shot dead during an officer-involved shooting in southwest Houston.

"The deputy got out of his vehicle, approached the suspect, explained to him why he was being stopped," Smith said. "As he did so, he could smell from the car a strong odor of marijuana."

The suspect then told the deputy he did not have a driver's license or car insurance to show him.

"During the course of the conversation, (the suspect) continually reached on the floorboard and through papers as if he was reaching for something," Smith said.

The officer, realizing he would have to take the suspect in for further questioning, called for backup, Smith said. Meanwhile, the suspect kept reaching for the floorboard, so the deputy asked him to step out of the car.

"That's when the suspect reached over, turned on the vehicle in spite of the verbal warnings of the deputy not to do so. The deputy then drew his duty weapon and gave him verbal demands again to not try to flee," Smith said. "The suspect ignored those verbal commands, began accelerating."

The deputy thought he was going to get run over so he jumped onto car's door sill.

"As he's hanging on to the car, the suspect is now starting to accelerate and reaches for the deputy's gun hand," Smith said.

When the suspect made contact with the deputy's hand, the officer fired a single shot, killing the suspect.

The officer suffered only minor bruises.

Detectives say they've found cash, a straight-edge bladed razor and a bandanna inside the suspect's vehicle.

Right now, the HPD homicide division, the Harris County District Attorney's Office, and the Precinct 5 deputy constable's office are all looking into the shooting. Authorities completely shut down the highway's southbound lanes for much of the afternoon rush hour, creating a backup that continues to impact travelers.

Commuters should consider exiting Westheimer or Westpark. The southbound back up on the West Beltway 8 goes all the way from Bellaire to 290 Northwest Fwy.

Locally, commuters should take Wilcrest or S. Gessner as a detour. Otherwise, depending on their destination, other major freeways, such as the 610 West Loop, Hwy 99 the Grand Parkway, and Hwy 6 south of I-10 are your best options. Remember, Hwy 6 north of I-10 is closed because of high water between Clay and Park Row.