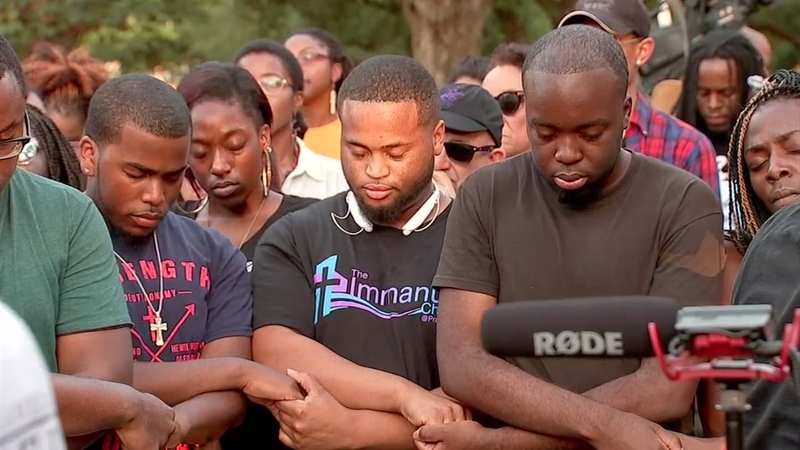 HEMPSTEAD, TX (KTRK) -- On the campus of Prairie View A&M Sunday night, there were prayers and calls for a federal probe into Sandra Bland's death. Bland is the Illinois woman who allegedly committed suicide in the Waller County jail. But Lieutenant Governor Dan Patrick is urging everyone to let the state investigation play out.

Dozens gathered for a vigil just hours after the Texas lieutenant governor made a stop at the jail. Public vigils were held in Texas and Illinois Sunday for Bland.

Bland was found dead in her cell on Monday. She was arrested last Friday after allegedly becoming aggressive during a traffic stop in Waller County.

The medical examiner's office ruled her death a suicide. But family and friends dispute the claims, saying Bland had just moved to Texas and was looking forward to starting a new job at her alma mater.

The Texas Organizing Project is calling for a Justice Department probe into Bland's death. Many want answers about her death.

"No one should jump to any conclusions," said Lt. Governor Dan Patrick. "Wait for the investigation to be completed and then see what the facts have to say. But regardless, it is a tragedy anytime when a young woman loses her life. That is always a tragedy and the family has lost a loved one."

"This is very suspicious when you are talking about a young lady who pretty much, the only reason she was stopped was a traffic stop and suddenly she winds up dead in a prison," said retired US Marshal Matthew Fogg.

Meanwhile, an attorney says Bland's family has ordered an independent autopsy to determine how the Chicago-area woman died in a Texas jail cell.

"We extend our heartfelt sympathy to Ms. Bland's family and friends. The Texas NAACP is currently conducting an inquiry into the tragic death of Sandra Bland in Waller County. We remain committed to finding an objective determination of the facts. We have serious concerns surrounding the routine traffic stop that led to Sandra Bland's arrest and subsequent death. We are also concerned by the immediate pronouncement of suicide as the cause of death by Waller County authorities and the endorsement of a specific funeral home to be used by Sandra Bland's family. To ensure that justice is fairly administered, the Texas NAACP is calling for an independent investigation by the United States Department of Justice into this case. The Texas State Conference of the NAACP is also asking for anyone with information regarding this matter to please contact us our office at 512-358-1359. We all deserve to know what led to the untimely death of Sandra Bland."