AUSTIN, TX -- State Rep. Borris Miles threatened to "beat up" a plainclothes Texas Department of Public Safety trooper while the lawman was guarding Texas Attorney General Ken Paxton during a private meeting inside Austin's Vince Young Steakhouse, according to a report obtained by The Texas Tribune.

Miles, a Houston Democrat, was at the restaurant eating dinner on the night of April 1. According to the DPS report, Miles got up from his table and was making his way to a private dining room where Paxton was holding a meeting when the DPS officer stopped him.

"When I saw Rep. Miles make a move for the door, I stood up, grabbed his arm to divert his attention to me and told him he was not allowed to go into the room," the DPS report states. "I then positioned myself between him and the door. At this point, Rep. Miles became belligerent with me, using excessive profanity."

In an interview, Miles said his version of events is "much different." Hours earlier, Paxton had spoken to him on the phone, he said, congratulating him on the House's passage of its version of the state budget. When Miles heard that Paxton was at the restaurant, he said, he just wanted to follow up on that conversation.

Paxton was having dinner at the restaurant in the private dining area with a group of lawmakers who included state Reps. Scott Turner and Jeff Leach. After hearing an argument outside the room, the two lawmakers came outside and tried to calm Miles down.

Miles said the DPS agent never identified himself until after he had placed his hands on the lawmaker.

"A white man just walks up to me and starts grabbing me," he said. "What do you do?"

The name of the trooper - an agent with the DPS Executive Protection Bureau, which provides the security detail for the governor, lieutenant governor and attorney general - was redacted from the DPS report. Paxton's office declined to comment on the incident and referred all calls to DPS. No charges have been filed, and DPS did not provide any information as to why a report was filed.

It is unclear whom Paxton was dining with.

According to that report, Turner tried to intervene in the incident, telling the trooper that he thought he could calm Miles down.

"Rep. Turner got Rep. Miles seated back at his own table and attempted to talk him down," the DPS report states. "Rep. Miles continued on with the profanity towards me and threatened to beat me up. In an effort to help the situation I stepped away from the table to call my supervisor. "

While the DPS agent was on the phone, Miles left the restaurant.

While Miles discussed the report with the Tribune on Tuesday, he was less forthcoming when first approached about the dust-up on Monday.

"Let me know when you get the report," he said at the time.

The Texas Tribune is a nonpartisan, nonprofit media organization that informs Texans - and engages with them - about public policy, politics, government and statewide issues. 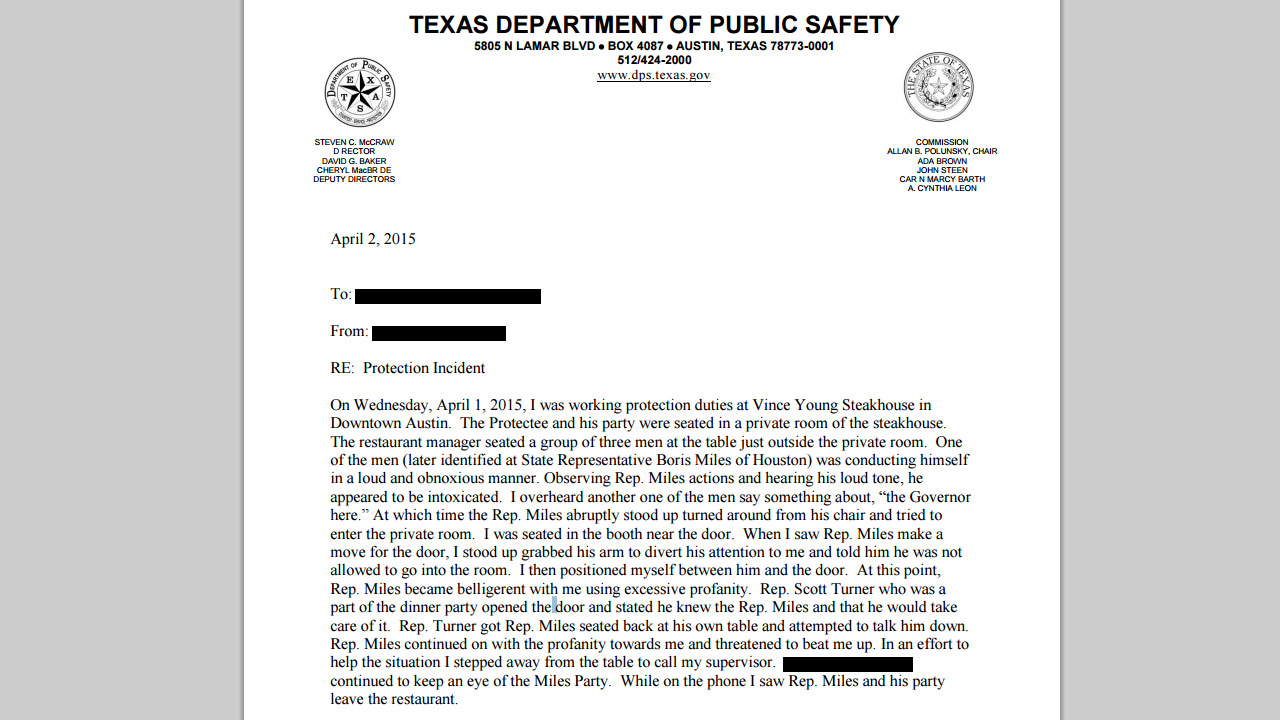