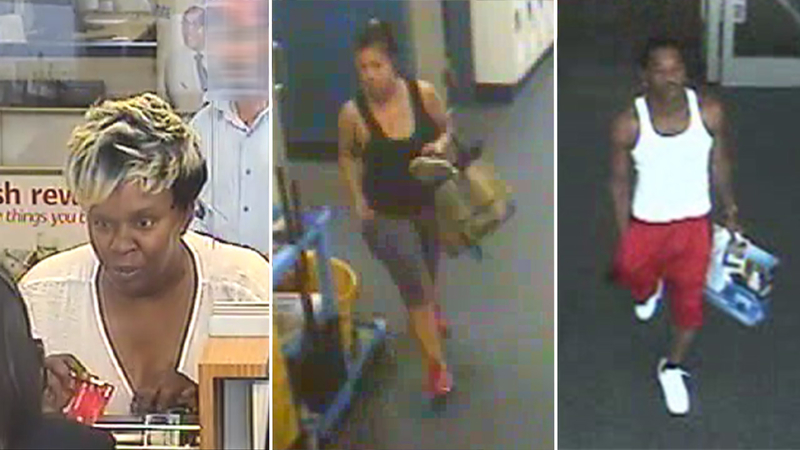 Investigators were called to the YMCA at 22807 Westheimer Parkway on July 7th. Three female victims reported that their purses, handbags and other belongings had been stolen from inside the locker room. Police say the victims locked-up their belongings before the thefts occurred.

One suspect is described as a Hispanic or black female, standing 5-feet, 5-inches tall, and weighing about 140 pounds. She was seen wearing a sleeveless black shirt with knee-length shorts and red sneakers.

The second suspect, police say, is a black male, about 6 feet tall, weighing about 190 pounds. Police say he's the man in the video wearing a white sleeveless undershirt with red knee-length basketball shorts and white sneakers.

The third suspect is described as a black female who is about 30 years old, standing about 5-feet-6 inches tall, and weighing about 160 pounds. Police say she tried to withdraw money from an ATM in Austin.

Fort Bend County Crime stoppers is offering a cash reward for information leading to the capture and conviction of the suspects. Anyone with information can report it anonymously by calling crime stoppers at 281-342-TIPS.
Related topics:
katyburglarycredit cardscaught on cameraidentity theft
Copyright © 2021 KTRK-TV. All Rights Reserved.
More Videos
From CNN Newsource affiliates
TOP STORIES