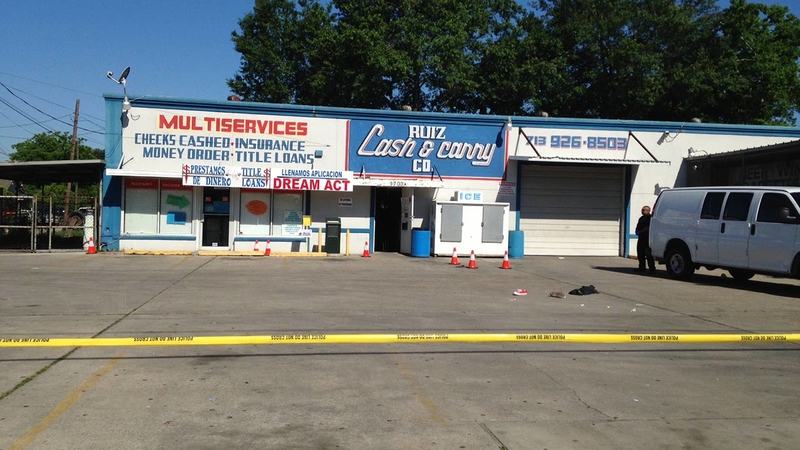 HOUSTON (KTRK) -- Eyewitness News has learned the man police say tried to rob an employee of an east Houston business this morning and has died. He was shot by an employee of that business who had a concealed weapon.

Officers were called to the Ruiz Cash n Carry store in the 1700 block of Sgt. Macario Garcia at Ave Q around 8:30am this morning.

Police say the store employee was about to enter into the store with a bag under his arm when a man approached him from behind and pointed a gun at him, demanding the bag, possibly thinking there was cash inside.

The employee, who also had a concealed handgun license was able to turn to his own gun, pull it out and fire four shots at the man. Two or three of those shots hit the man in the chest area.

"From what I gather is that when the employee went to open the door, the gun was already put at the back of his head, and so, I don't know what words were exchanged, but at this point the investigation is still ongoing, they're still talking to him (the store employee) and he turned around and saw the suspect had a gun."

Police say the store employee had no money in the bag at all, but rather, he carried a toiletry bag with his medicines inside.

Eyewitness News has learned the suspect, who was transported to Ben Taub hospital, has died.

One bullet made it across the street.

Witnesses are also reporting that a vehicle may have been seen across the street with a possible second suspect inside.

The store employee was not injured.

Keep checking back on this page to get real-time updates as this story unfolds. To get alerts for breaking news, download the ABC-13 news app for iPhone or Android. You can also get breaking news alerts sent to you by email.
Related topics:
houstonshooting
Copyright © 2021 KTRK-TV. All Rights Reserved.
TOP STORIES
14-year-old found shot and killed on Kingwood walking trail
Speaking to UN, Biden says world at 'inflection point' amid crises
Fall front moves in late Tuesday bringing cooler temperatures
Police union blames judge for deadly shooting of HPD officer
Man dies at hospital after being shot while driving in SW Houston
Man accused of killing HPD officer is no stranger to police
J&J says 2nd dose of vaccine after 2 months results in more protection
Show More
2 charged with murder after woman undergoes butt lift and dies
Everything we know about the HPD officer killed on duty
1 HPD officer fatally shot, 1 injured while serving warrant
White House looking into footage of Border Patrol agents on horseback
Autopsy set to be performed on Petito; Laundrie remains missing
More TOP STORIES News