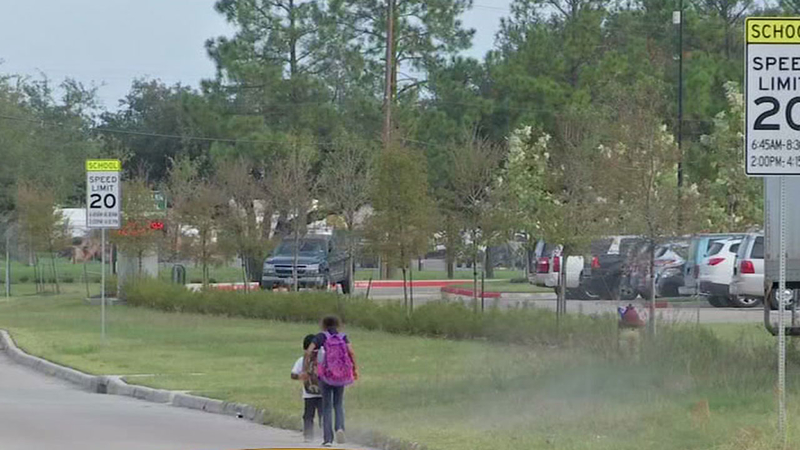 The fifth and sixth graders from Lonnie B. Keller Middle School have pleaded with leaders for more pavement along Magnolia Drive. Simply put, they want sidewalks along the busy road so they don't have to walk in a ditch.

Eyewitness News camera captured student after student walking in the street. The young children were forced to navigate around speeding cars and semi-trucks as they made their commute. Parents like Donna Taylor and Michelle Fisher told abc13 something needs to be done soon.

"Yeah, it makes me nervous for all the kids walking without a parent," said Taylor. "There are kids out here that are unsupervised. Someone needs to be out here."

For about the past year, students have attended Pasadena city council meetings. They've asked time and time again for help even showing pictures of the dicey situation.

So far, their requests haven't gotten much traction with those in power.

The issue of sidewalks along Magnolia Drive is proving to be quite the political football. A representative with Pasadena Independent School District said they did all they could when Keller's new campus was built. Since they don't own the land in question, they couldn't install sidewalks but stressed they work tirelessly to make sure students remain safe.

A group of Keller Middle School students routinely attend the monthly Pasadena City Council meetings. At each meeting the students participate in the public comment portion of the meeting by presenting an update of special activities on the campus. This participation provides an opportunity for students to experience the process of local government while keeping the lines of communication open between the school and city.

Student safety is a priority in Pasadena. Sidewalks would provide safer conditions for the students who walk to and from school. Whether students have sidewalks or not, the district will continue to emphasize safe walking habits for students.


On Thursday afternoon, Pasadena Mayor Johnny Isbell reached out to ABC-13 about the sidewalk situation.

In email to Eyewitness News, he wrote "adding sidewalks along Magnolia is a priority not just to the students at Keller Middle School, but to all of us in the City of Pasadena. In fact, during the Pre-Council meeting held last week, I put forth an ordinance reallocating $45,000 to the 2015 On Call storm sewer and pavement replacement project, and the Magnolia sidewalk project was discussed during that meeting as one of the first projects the city would undertake with those funds. The majority of our Pasadena City Council voted in favor of that reallocation and in support of the Magnolia sidewalk project, although interestingly, Councilman Cody Wheeler, who called adding sidewalks a "no-brainer" in your story, voted against the project. He also voted against the city budget, which includes sidewalk projects throughout Pasadena."

Mayor Isbell also stated students only brought their sidewalk concerns twice to city council. He told ABC-13 in an email "most often, they share information with City Council about awards, accomplishments and community events. I enjoy having these students involved in city government, and I, along with other City Council members, have regularly encouraged them to keep coming to meetings."

Mayor Isbell also added "the safety of children in our community is one of the top priorities for me and for the City of Pasadena, which is why we had already put a plan in action to address this issue. The first step is to enclose the roadside ditches. Once that work is complete, we can add sidewalks."