One dead in officer-involved shooting in NW Houston

KTRK
HOUSTON (KTRK) -- Police say a suspect was shot and killed in an officer-involved shooting in northwest Houston.

The incident began at a Cash Store in the 13500 block of the Northwest Freeway. Police say there were three robbery suspects. One died at the scene, and another injured suspect was taken to an area hospital for treatment.

It happened around 2:30pm Thursday. Police say they were suspected in other Cash Store Robberies. Officers were tailing them.

"They had been surveilling them for a good part of the day," says HPD Spokesperson Jodi Silva. "At which time they had gone to several Cash Stores, parked, stopped. This is the first Cash Store they entered."

Police were waiting for them to come out with their guns drawn. When the first suspect walked out, police told him to put his hands up. We're told he ran. The other two came out ready for battle.

"They had the guns in hand, guns in the air and they were advancing toward the officers which had taken cover," Silva says.

Fearing for their lives, Sgt. H. Torres, Officers J. Sanders and T. Curtner fired, killing one suspect and seriously injuring the other.

That third suspect ran into a Pawn Shop a few doors down and somehow got up into the ceiling. SWAT officers were brought in to apprehend him.

"When SWAT arrived, the suspect during communication with them fell through the ceiling and was taken into custody without further incident," Says Silva.

Nearby businesses locked their doors.

"They had us on lockdown the whole time, and yeah it was really scary," says Kat Reynoso.

And people going about their normal routine in this busy shopping center walked right into a scene out of a movie.

"I just picked up my son from school," Jennifer George told us at the scene. "So it's not a pleasant sight to see. It's very sad. It's a waste of life...for money."

Police have not released the names of the suspects, or the condition of the one who was shot and survived. 'Don't use a gun:' Mental health call ends in shooting 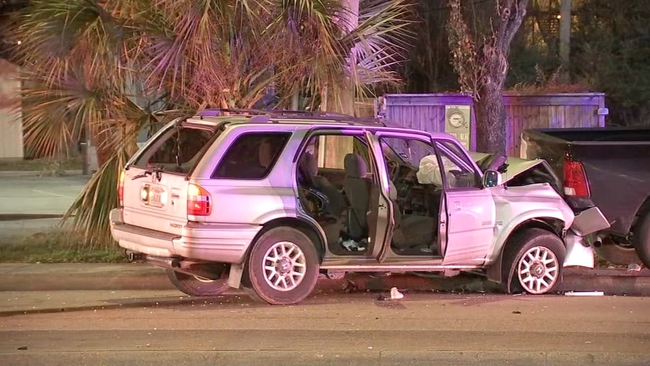