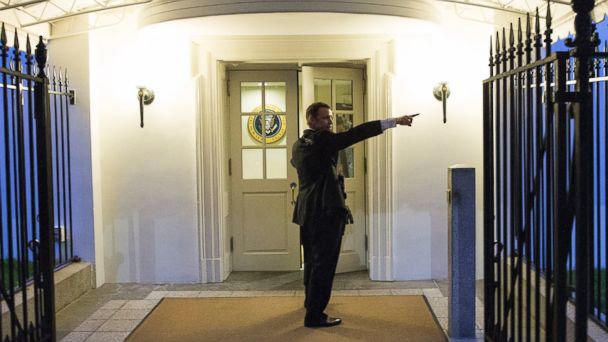 ABCNews
By MIKE LEVINE
Despite President Obama's concern, the head of the Department of Homeland Security is urging the public to "not rush to judgment" on the White House intrusion that took place Friday.

Homeland Security Secretary Jeh Johnson said he encourages "all of us to ... not second-guess the judgment of security officers who had only seconds to act," insisting in a statement issued today that the public should wait "until all the facts are in."

White House Intruder Had Knife, Claims to Be Iraq Vet

Johnson noted that the head of the Secret Service, a DHS component, has ordered a review of the events that unfolded Friday, and said he will "carefully evaluate the findings and recommendations of the review" when it's completed.

Reacting to Friday's security breach, White House Press Secretary Josh Earnest said Obama is "obviously concerned" by the embarrassing security breach, but added that the president "continues to have complete confidence" in the Secret Service.

"I had the opportunity to speak briefly with the president about it earlier today," Earnest said. "He did indicate, as you would expect, his family lives in the White House, and so he is obviously concerned by the incident that occurred on Friday evening."

"Providing security at the White House is complicated business," Earnest added, pointing to its dual role as a government office building and popular tourist destination. "The Secret Service has the challenging task of balancing the need to ensure the safety and security of the First Family, while also ensuring that the White House continues to be the People's House. And balancing those equities is challenging work, but it's clear that in this case a review of that work is warranted and that review will be conducted."

When ABC News' Jonathan Karl asked the president today whether he had confidence in the Secret Service, Obama said the agency "does a great job. I'm grateful for all the sacrifices they make on my behalf, and my family's behalf."

Earnest said the ongoing review is studying the positioning of tactical and non-tactical assets inside and outside the fence line, but the president is "confident that the reforms that are determined to be necessary will be implemented in the proper way."

"It will include a review of technical or physical security enhancements that may be necessary to improve security at the White House. It will also include a question about ongoing staffing and an assessment about whether or not additional staffing is needed," Earnest said.

Earnest refused to say whether Obama personally favors building a higher fence or further restricting access near the White House, but added that Obama and several senior administration officials were briefed "multiple times on the actual incident" over the weekend, and that a number of changes to the security posture have already been implemented in the "immediate aftermath" of the incident.

Texan Omar Gonzalez, 42, was allegedly carrying a folding knife in his pocket when he jumped the 9-foot fence, ran about 100 yards across the north lawn of the White House and then made it inside one of the most secure buildings in the world.

Gonzalez has been homeless in the nation's capital for the past three months after 13 years in the U.S. Army, including a tour in Iraq.

After the breach, Johnson expressed continued confidence in the Secret Service.

"It is important to remember that the U.S. Secret Service remains one of the best, if not the best, protection services in the world," he said.