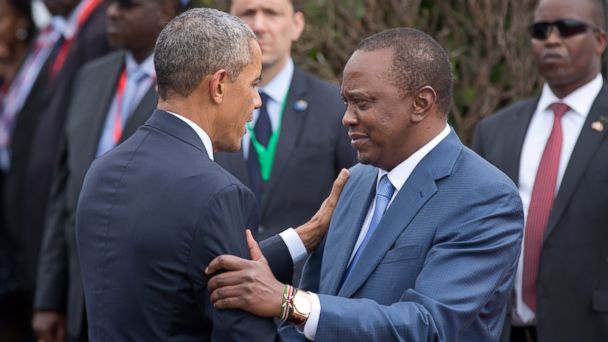 NAIROBI, Kenya -- President Obama publicly disagreed with his Kenyan counterpart over gay rights today as he urged African nations not to discriminate against individuals based on sexual orientation.

The president made the remarks at a news conference he held with Kenyan President Uhuru Kenyatta, who called gay rights in his country a "non-issue." Obama discussed the subject on his first full day in Kenya while drawing on his own background as an African-American in the U.S.

"If somebody is a law-abiding citizen who is going about their business and working in a job and obeying the traffic signs and doing all the other things that good citizens are supposed to do and not harming anybody, the idea that they are going to be treated differently or abused because of who they love is wrong," Obama said.

Shortly after, Kenyatta said while the U.S. and Kenya share many values, gay rights is an issue on which the two countries disagree.

"There are some things that we must agree we don't share," he said. "Our culture, our societies don't accept [homosexuality]."

Kenyatta added it was difficult to impose beliefs on the Kenyan people that they "do not accept."

"This issue is not really an issue that is on the foremost mind of Kenyans and that is a fact," he said.

While the U.S. has made strides on gay rights issues, most recently with the Supreme Court's decision on same-sex marriage, many countries in Africa, including Kenya, hold more conservative views. Same sex relations are still illegal in Kenya and Ethiopia, where the president will travel on Sunday.

Ahead of the trip, several Kenyan political and religious leaders had warned President Obama not to discuss gay rights while in the country.

Fighting al-ShababThe two presidents also discussed the counter-terror efforts their countries have employed against al-Shabaab. Obama said strides have been made against the terror group in certain regions, but he also acknowledged they still pose a serious threat.

"We have systematically reduced the territory that al-Shabab controls. We have been able to decrease their effective control within Somalia and have weakened those networks operating here in East Africa," he said. "That doesn't mean the problem's solved. As is true around the world, what we find is that we can degrade significantly the capacities of these terrorist organizations but they can still do damage."

Cracking Down on Ivory Sales and Establishing Direct US-Kenya FlightsObama also announced his administration is proposing a rule to crack down on illegal ivory sales by banning the sale of ivory across state lines. Poachers killed approximately 100,000 elephants for their ivory between 2010 and 2012, according to a study released last year by the Proceedings of the National Academy of Sciences.

The president also announced his intention to establish direct flights between the U.S. and Kenya, though he would not offer a timeline, saying there are protocols that must be cleared first.