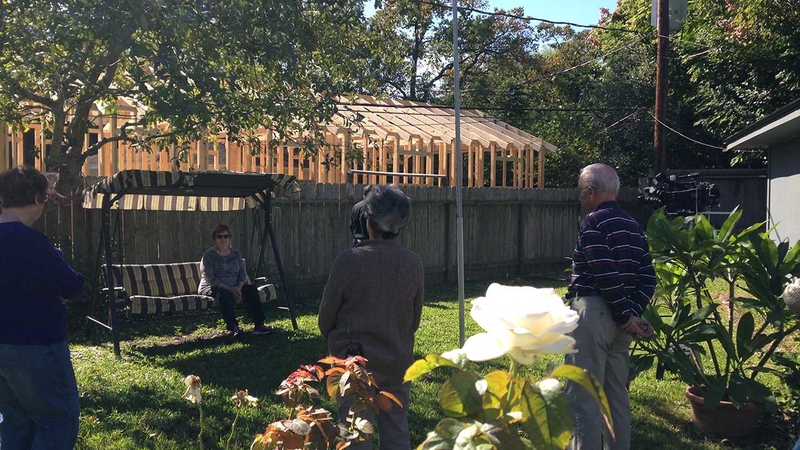 SHARPSTOWN, TX (KTRK) -- It's been the Sharpstown home of Suzanne and Pete Kemp for more than forty years. The quiet backyard full of flowers now has a construction project towering over the back fence.

"They just started building that and I thought oh my gosh what are they going to do?" Suzanne Kemp said.

Neighbors wondered what all the hammering was about.

"The noise and the idea that these people don't care enough about our neighborhood that they would build something like that," Lynn Knobelock said. "It has ruined my neighbors back yard," Linda Poole added.

The bigger question for them, what is it going to be?

The homeowner and builder at the property says his project has been approved by the city and he's acquired all the proper permits. A statement the city also backs up. He told us over the phone he is building a shed that will be used for storing personal items on his property.

"Each room has a door and a window so that's not a shed if you have six different rooms," Knobelock added.

"The Sharpstown Civic Association is taking this matter seriously. We are working with the residents and legal counsel to resolve any issues. We are committed to upholding the best interests of the community."


It's not the first time residents have questioned what's going on next door. Down the street from the building project, a backyard structure neighbors say was finished three years ago. The city says they've received a recent complaint on this address that it's being used as a "hotel" and an investigation is underway on any potential violations. Linda Poole says,

"I see people coming with suitcases periodically. I see mostly young people coming and going during the day. Many vehicles parked in the driveway and on the street," Poole said.

Now she's watching and wondering about the construction down the street.

"If it was in my backyard I think I'd have to move," Knobelock said.