Neighbor shoots intruders who tied up family in NE Houston 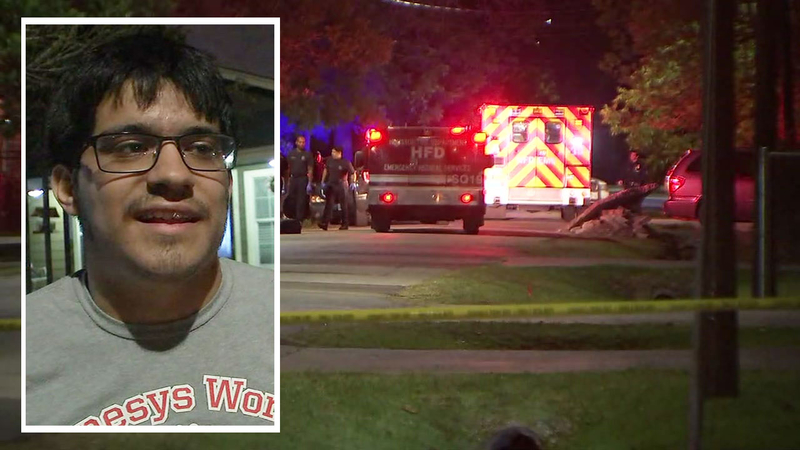 HOUSTON, Texas (KTRK) -- Police are looking for suspects involved in a deadly home invasion. One of the alleged intruders is dead and a second was injured after a man opened fire on them to protect his relatives in northeast Houston.

Investigators said four men broke into a home, tied up a family and pistol-whipped them early this morning on Crandon Street.

Ruben Garcia and Rene Garcia are twin brothers who live inside the home with their family. Ruben told Courtney Fischer he was tied up with his own shoelaces early this morning and pistol-whipped his father.

He said he watched as the intruders held his family at gunpoint, threatening at one point to kill his mom if he did not come out of his room.

"I didn't know what was happening until I saw the man holding a gun to my mom's head," Ruben said.

"I was like, 'what the heck is happening?'" teen in home invasion says
EMBED More News Videos

A teen who lives inside the home targeted by intruders talks with Eyewitness News.

He was bound along with his twin brother, mom and 10-year-old sister.

"I hear a lot of screaming and shouting," Ruben said.

Rene said the men stole his mother's jewelry and his father's life savings.

"They were telling us, 'where do you guys have the money? We know you have money' and stuff like that," Rene said.

Ruben said he listened to what the intruders were saying, and then his uncle who lives in the house next door, saved the day.

Ruben claims his uncle burst into the home with a gun and shot at the four guys. One of those suspects was taken to the hospital by ambulance, and another died at the scene. Two others got away.

An alleged intruder is dead and a second is wounded after a violent home invasion overnight in northeast Houston.

"If they come back, we are going to be more prepared," Rene said.

Here's what those evidence markers are next: shell casings #abc13 pic.twitter.com/Hz4lLd7lUk

There was another man who was injured during the home invasion. He was a contractor who works for the father who just happened to show up for work. He got caught up in the fight, but is expected to be okay.

Investigators recovered a backpack on scene, but it's not clear if the jewelry or money was inside.