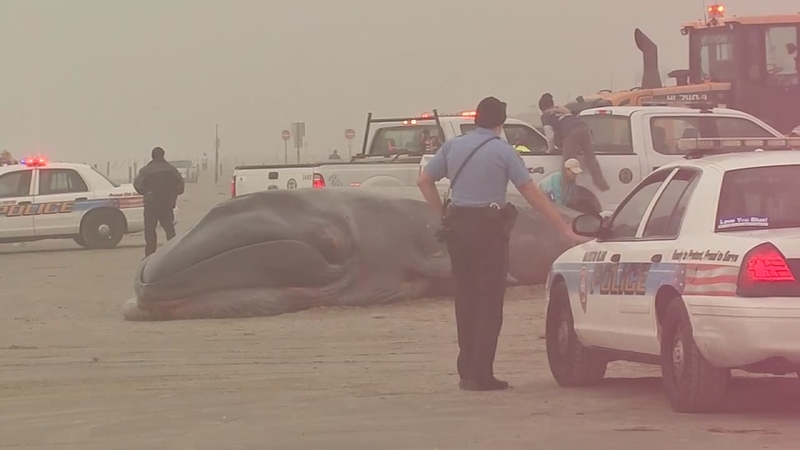 GALVESTON, TX (KTRK) -- Marine scientists have performed a necropsy on a massive whale that beached itself in Galveston Tuesday.

Officials hope the necropsy, which began at 8am, will explain why the 45-foot male whale died on the same beach where it was discovered by a jogger. Experts are nearly certain it's a sei whale between 6 and 12 years old.

Security was with the carcass of the big mammal overnight even as spectators hoped to catch a glimpse after dark.

The whale was first spotted just before 7am, and by the time the sun had risen over Galveston Tuesday, a large crowd had gathered to see the animal up close.

Efforts to save the whale failed when experts realized there was nothing they could do. A decision to euthanize the whale became unnecessary when marine scientists realized the whale had already died on the shore.

"It's very rare to see a large whale like this on the Texas coast," said Heidi Whitehead with the Texas Marine Mammal Stranding Network. "We do see one every two to three years wash ashore, but it's uncommon to be alive."

Local leaders, police and volunteers worked to pull the dead mammal closer to shore. After several tries, we finally got a clear glimpse of the whale.

"We obviously realize it's a learning experience, as well. It's something you don't see every day," said Whitehead.