KGO
By David Louie
SAN JOSE, CA -- A cold case is heating up months after a woman's husband was arrested for her murder. A mother of two's body was found wrapped in a quilt in the backseat of her car 25 years ago. But now, that case is being dismissed because a California prosecutor had an affair with a key witness.

It's a stunning development that sounds more like something from a TV drama than real life. But it is a secret affair that is now having very real consequences for the family of a murdered woman who hoped for justice.

It's unusual for the work of a prosecutor to come into question before a trial. The break in this case came from new DNA analysis of a quilt. However, the handling of the Santa Clara County case became suspect.

It was DNA found on a quilt that prosecutors used to charge two brothers for the murder of 38-year-old Cathy Zimmer in 1989. Her body was discovered in her Chrysler New Yorker, covered by the quilt, in the garage at Mineta San Jose International Airport. 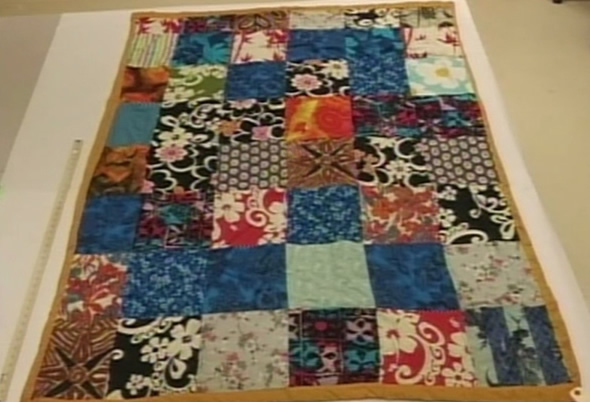 The body of Cathy Zimmer, a San Jose mother of two, was found wrapped in this quilt in the backseat of her car in 1989.

But that same DNA evidence brought 70-year-old Robert Zimmer to court on Tuesday, where charges were dropped against him and his 67-year-old brother David, who was the victim's husband.

David Zimmer did not appear in court.

"Kudos to the Santa Clara District Attorney's Office because they stepped up, they saw what was happening, and they dismissed the case against my client," said David's attorney Michael Cardoza.

The DA's office took that action when it discovered the original prosecutor, Ted Kajani, had an undisclosed relationship with the DNA technician who likely would have been a trial witness. The DA's office also said Kajani failed to provide evidence to the defense attorneys.

Cardoza said his client was a victim.

"He was arrested because, in my opinion, of a very overzealous young district attorney that looked at evidence and interpreted it in the wrong way," Cardoza said.

Robert Zimmer has been in jail for eight months.

"He was overjoyed," said his attorney Nicole Alvarado. "But a part of him was a little cautious because then he asked, but can they refile? And I said yes, they can, but they shouldn't because there just isn't any evidence."

Assistant District Attorney Marc Buller would not say if Kajani has been disciplined. He did say his office will continue to work on the Zimmer cold case.

"We're going to continue to look as long as it takes to evaluate this case and as much resources as we need to make sure we put forth a case that justice deserves," Buller said.
Related topics:
san josecrimesanta clara countymurdercourtinsurancecourt casemurder mysterycold case
Copyright © 2020 KGO-TV. All Rights Reserved.
More Videos
From CNN Newsource affiliates
TOP STORIES