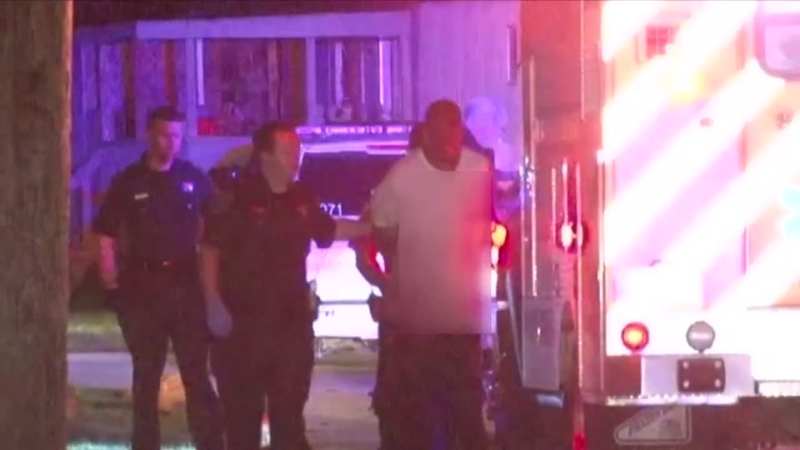 Deputies say a 23-year-old woman was stabbed to death by her boyfriend inside a northwest Harris County townhome.

Dispatchers received a call to 911 last night from a woman who said her nephew was upstairs stabbing his girlfriend. The townhome where it all took place is in a gated community on Atherton Canyon Lane.

The 26-year-old suspected killer fled the scene, and the Harris County Sheriff's Office says a citizen helped lead them to the suspect wanted in this deadly Wednesday evening stabbing.

Hours after the stabbing, officers had cornered a suspect at a trailer park in the 14000 block of Walters Road. They brought the K-9 units out and the suspect ran once again. Officers had to deploy their stun guns to stop him and take him into custody.

Authorities say the suspect was wearing a bloodied shirt at the time of his arrest. He was being treated at the scene by Cy-Creek EMS.

Police are still trying to piece together what happened and are working to determine a motive.

Neighbors say the couple kept to themselves since moving to the neighborhood three weeks ago from out of state. Many of them are uneasy, but perhaps the most shaken is the woman who lives next door.

"He came over and he was like how are you doing can I come in? I'm just like, 'No I don't know you,' and I closed the door," said Corni Wright.

She's talking about the suspected killer. She says that exchanged happened about 20 minutes before deputies showed up, and it's the only time she has talked to him.

"I'm just glad I didn't let him in because who knows what would've happened," Wright says.

Investigators have still not released the name of the suspect or the victim. It's unknown what charges have been filed.