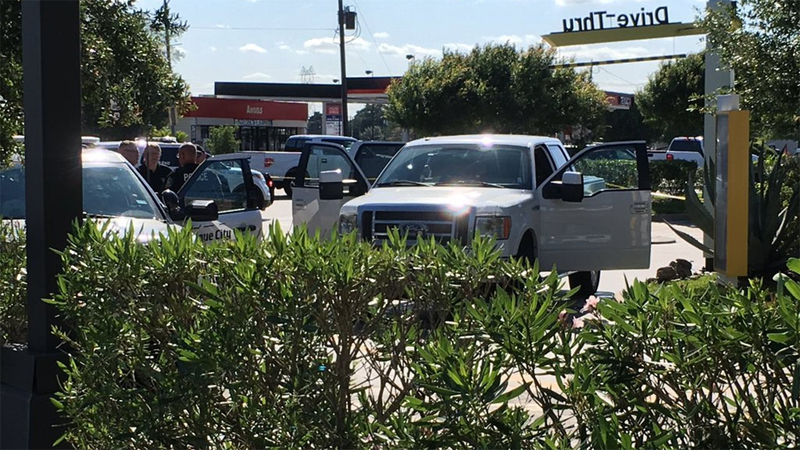 LEAGUE CITY, TX (KTRK) -- A man who shot and killed a would-be robber in a McDonald's drive-thru was protecting himself and his young son, his attorney Robert Pelton said.

League City Police say the robber approached the man while he was in his pickup truck in the drive-thru after 2 p.m. and pointed a gun at him. A struggle ensued and the man inside the truck shot the robber three times, according to investigators.

LCPD believes this is a case of self defense. Man in truck had 4 y.o. son in the back seat. He was not hurt. Man being interviewed now.

"He was trying to get his son, protect his son and I think he obviously saw his chance then to defend himself because he was afraid he was going to get shot," Pelton explained.

A surveillance camera from a cell phone store captured the moment when the three shots were fired.

Stanford was working in the store at the time of the shooting.

"It was horrible. The dispatcher kept asking me, 'does he have a gun? Are you okay? Can you lock your doors?' It was horrible," she said.

Pelton's client is licensed to have a handgun and he used it to protect himself and his child.

"Never would have dreamed in a million years that a McDonald's drive thru, like blocks from the police station in broad daylight, 2 or 3 o'clock in the afternoon, something like this would happen," Pelton said.

"I think he would want other citizens to know they have a right to protect themselves. You have to be cautious all the time, wherever you are."

League City Police say the man who was shot later died at Clear Lake Regional Medical Center. He has not been identified. The case will be referred to the district attorney's office.