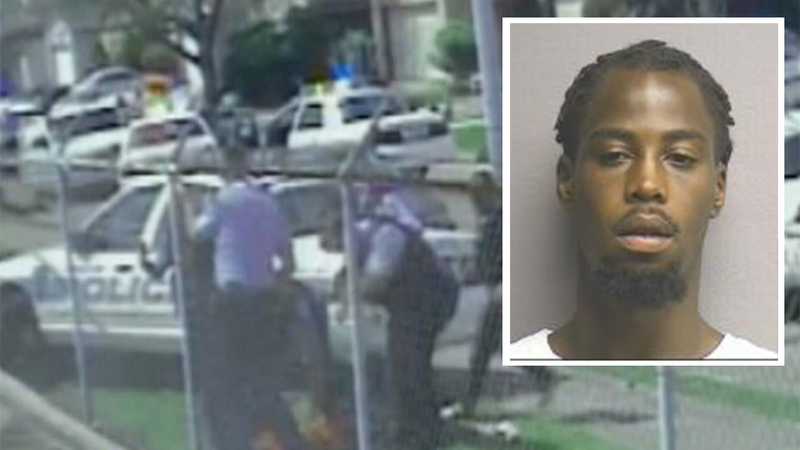 HOUSTON (KTRK) -- Chad Holley, the man at the center of a 2010 beating probe involving Houston police, has been charged with capital murder.

The charges stem from the shooting death of David Trejo-Gonzalez, 42, during a robbery back in September.

Police said Trejo-Gonzalez was shot around 9:45pm at East Crosstimbers near Fulton on Wed., Sept. 21.
HPD called it a robbery gone bad, and said the victim was walking from the parking lot of his apartment when he was attacked.

The suspect, who was unknown to police at the time, was said to have driven off in a white low-rider style truck or SUV, driven by an accomplice.

Holley has now been identified as Trejo-Gonzalez's alleged killer. He is the one police suspect of shooting Trejo-Gonzalez during the scuffle.

Holley was charged on Sunday, and is due before a judge downtown on Tuesday.

March 2010: Chad Holley was only 15-years-old when he was relentlessly beat, kicked and stomped by several Houston Police Officers after fleeing the scene of a burglary. Surveillance video shows Holley running away from police when a police cruiser speeds toward him and cuts him off. The cruiser slams into Holley. Holley's body goes flying across the car onto the ground. His body rolls and he ends up on his stomach. He clamps his hands over his head. Policemen run up to him and begin attacking him. Holley was a sophomore at Elsick High School in Houston at the time. Only one of the officers involved in the incident, Drew Ryser, was convicted of official oppression. Officers Raad Hassan and Phil Bryan pleaded "no contest" for their roles in the beating and were sentenced to probation. A fourth officer, Andrew Blomberg, was found not guilty of any wrongdoing by a jury last year.

October 2010: Holley was found guilty of stealing cash, jewelry and a keyboard from a Houston townhouse. The surveillance video of the police beating was not shown at his trial. He was put on probation which he completed when he turned 18-years-old.

October 2012: Holley and his friends were charged with burglarizing a home. He was sentenced to seven years probation.
Chad Holley, man at center of 2010 police beating probe, arrested

Chad Holley makes a court appearance on a burglary charge in 2013.

September 2016: David Trejo-Gonzalez, 42 is shot and killed during an armed robbery.

October 2016: Holley arrested and charged with theft and trespassing.

December 2016: Holley identified as the suspect in the murder of David Trejo-Gonzalez. Holley is charged with capital murder.

PHOTOS:Chad Holley In The News

If you're viewing on our ABC13 news app, tap on the photo above to see more images.
Related topics:
houstonarrestmurderrobbery
Copyright © 2021 KTRK-TV. All Rights Reserved.
More Videos
From CNN Newsource affiliates
TOP STORIES