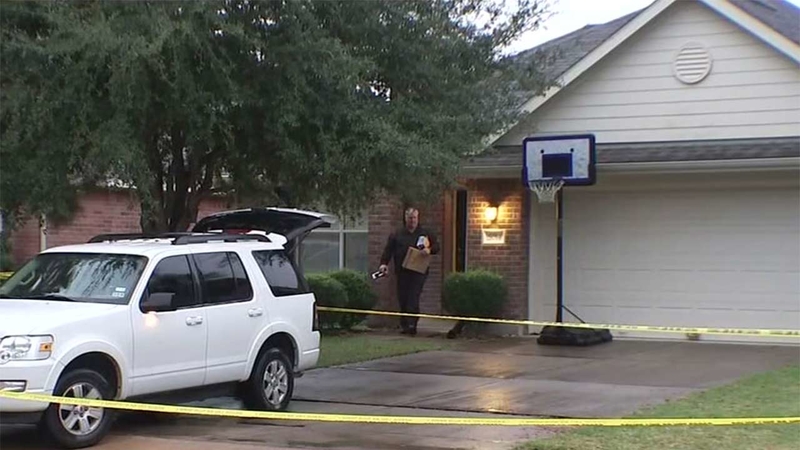 KATY, TX (KTRK) -- Authorities say a Houston man "laid in wait" before shooting his ex-girlfriend and killing her current boyfriend.

The Fort Bend County Sheriff's Office identifies the shooter as 28-year-old Wilson Marcella Ferrer. They say he attacked the couple at her home in the 5000 block of Moss Garden Lane just before 9pm Monday.

Ferrer even pointed the gun at neighbors and led police on a manhunt.

"It was a woman screaming bloody murder for her life and when he was on 911, was going, 'Don't do this. It's not worth it. Don't do this. We are calling the cops,'" said neighbor Rebecca Hall.

Hall tried to stop the violence happening to her next door neighbor and nearly lost her own life because of it.

"The next thing I know I see a muzzle of gunfire coming at me," she said.

Mike Hall says after the man shot at his wife he, too, came face to face with the suspect.

"He was standing right about here and turned and me and him are like starring at each other and I am like, 'Oh my God, oh my God. I am a dead man,' and I turned to go back in the house and waited for gunshots or my front door to be kicked in," he said.

Instead, the suspect ran into the victim's backyard then crashed through Hall's fence.

That set off a six-hour long manhunt that ended at 3am when deputies could not find the shooter. Eighteen minutes later, neighbors heard more gunshots and called deputies back to the home.

"We are not sure if he knew we were outside or not, and there was a van in the garage," said Major Chad Norvell with the Fort Bend County Sheriff's Office. "He started to open the garage door and stopped and that's when he shot himself."

That final gunshot ended an 8-hour ordeal that still has the Halls deeply shaken by what they saw.

"Helpless," said Leann Hall. "You're helpless because you want to do something to stop it. Just stop. Just stop. It's not worth it."

Deputies say the suspect had parked his car down the street from the home and was there for several hours before the shooting.

According to detectives, Xylia Castillo, 40, suffered a gunshot wound to the abdomen and is listed now in stable condition at the hospital. Her boyfriend is identified as 38-year-old Joshua Long. Deputies discovered him in the backyard of the home, shot multiple times.

There were three children in the house, aged 2-6, when the attack happened. They were not hurt and are now safe with family members. Investigators say Long had recently met Castillo and he and his child were visiting at Castillo's home.