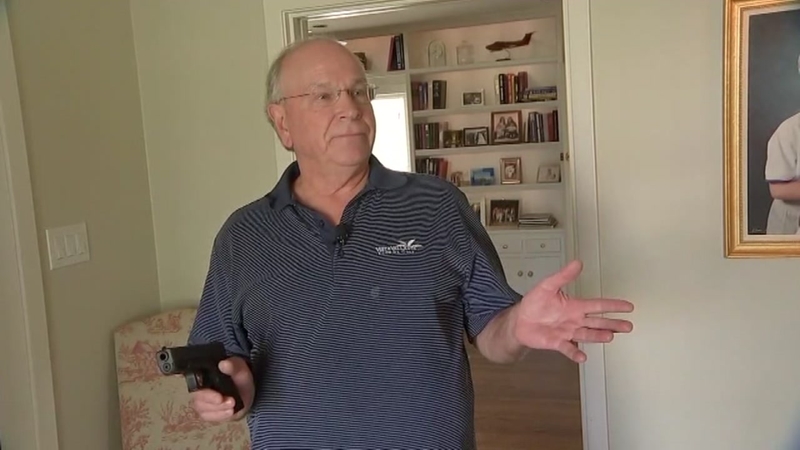 HOUSTON (KTRK) -- "It's really surreal," says Mike Colgin, a mild-mannered retiree who never expected to open fire on an intruder into his home.

Tuesday morning around 4:30 a.m., Colgin was asleep inside his Tanglewood home when he heard the sound of glass breaking. That's when he grabbed the gun and began walking down the hall toward the living room.

"So I come up to the corner, and I look through the glass in the grandfather clock," Colgin demonstrated to Eyewitness News. "That's how I can make out who it was."

Colgin says the man's head and shoulders were already inside his home through the broken glass window. As soon as Colgin made sure it wasn't a neighbor who needed help, he made a move.

"So, I took two steps out, aimed, and boom! He went straight out window."

The suspect, Julio Socoy-Velasquez, ran down the street, but only made it about three houses down. He was quickly arrested by police, and taken to the hospital. The bullet grazed the side of his head and ear, but he was not seriously injured. Socoy-Velasquez is now in jail, and the shooting has shaken the upscale Tanglewood neighborhood.
"I thought it was shocking there was a shooting in the neighborhood," said fellow Tanglewood resident Doug Hawn, who was walking his dog near the site of the shooting. "Although I think my neighbor had every right to do it."

A portion of the break-in was captured from Colgin's doorbell surveillance video below. On the video, you can see the suspect grab a paver from the front walkway, then aim for one of the windows on the house.

"He walked over here, and bam! Starts knocking it out," said Colgin.
Since he didn't steal anything before getting shot, the suspect is only charged with a misdemeanor, not a felony robbery case. Colgin's just relieved, nobody else was hurt.

"I'm getting a lot of grief (from my friends for not firing twice, but I'm okay with just once."

Keep checking back on this page to get real-time updates as this story unfolds. To get alerts for breaking news, download the ABC13 news app for iPhone or Android. You can also get breaking news alerts sent to you by email.
Copyright © 2021 KTRK-TV. All Rights Reserved.
TOP STORIES
Woman with gunshot wound found in street near middle school
Houston records over 100 more homicides compared to June 2019
Eastex Fwy shut down for 2 hours at Hopper Road due to fatal crash
Rain chances rise Monday night with rare June front
Luby's finds buyer for cafeteria brand and 32 Texas restaurants
Shooting at 100-person Airbnb party leaves 2 teens shot
'Lost another great person': Community holds vigil for tattoo artist
Show More
How a song helped a woman save her husband from a heart attack
Boil water notice lifted for Lake Jackson residents after low pressure
Mayor to join in plea to find 62-year-old woman's killers
This Texas-based wing chain is no longer just winging it
Suspect accused of killing man over PlayStation due in court
More TOP STORIES News