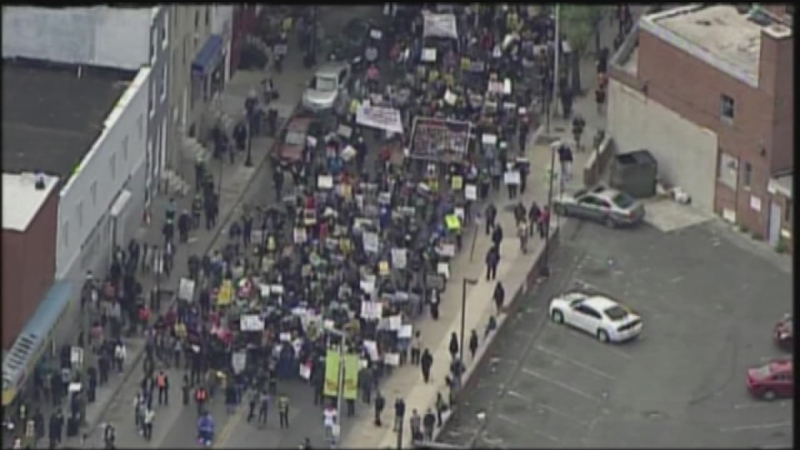 HOUSTON (KTRK) -- Community leaders in Houston are closely watching what's happening in Baltimore. And some are getting directly involved, trying to help bridge the divide between rioting youth and the police.

"We have never approached 14 and 15 year olds as the leaders of a riot or march or encounter," says NAACP National Field Director Carmen Watkins.

She's flying to Baltimore Wednesday to work with the group in the neighborhood where unrest surrounding Freddie Gray's death continues.

"This is not a group in the past that we have really targeted for development and organizing skills and advocacy skills. "And maybe we should," she says. "And maybe that is the takeaway. We have allowed someone or something to motivate them without having the knowledge of of how to move forward in a positive way."

She doesn't support the violent turn of events, but she tells Eyewitness News that she gets the sense of frustration in the community.

"Even today as we speak, they don't even know what he was stopped for. that has fueled the frustration."

"Protests like that that turn violent and riotous are really nothing more than a physical expression of people who can't be heard and who are not heard," says Dr. D.Z. Cofield.

Dr. Cofield pastors Good Hope Missionary Baptist Church in the Third Ward. He says there's no question that we're just one event from a similar scene playing out right here in Houston.

"If you walk the streets of Houston, if you talk to young people, you find the same frustration, the same anger, the same sense of hopelessness in Houston. Anybody who denies that is diluting themselves."

The only way he sees to avoid it is to take on those issues they face head on: "...those issues of unemployment, a lack of education and opportunity. the issue of systemic racism that's present in the criminal justice system that allows people based on the color of their skin to be treated one way as opposed to another."

Carmen Watkins says those issues will certainly be a part of the conversation when she goes.

We asked what she hopes to accomplish as someone from 1,500 miles away: "It doesn't matter if I'm there a month, or a week or a year. I'm there, and I"m back home. But this community will be there forever my role It is not there to take over. Certainly not to plant a flag and say 'Carmen was here.' I come back to Houston. They stay in Baltimore. so this has to be something they can continue and maintain long term."