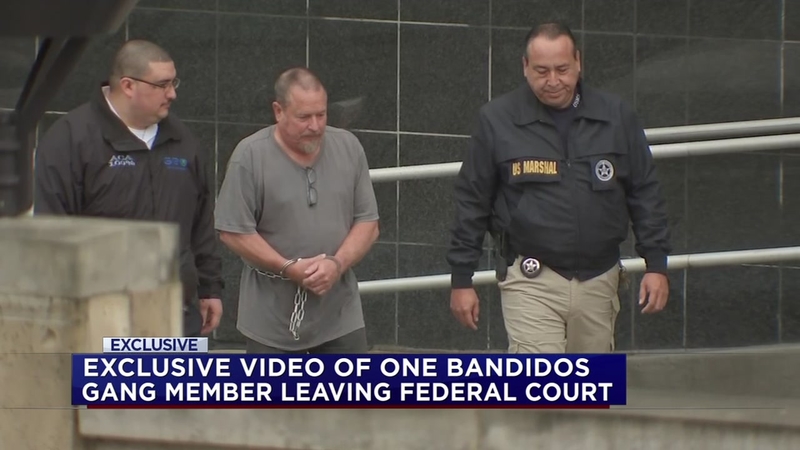 SAN ANTONIO, TX -- National leaders of the Bandidos biker gang were arrested Wednesday on charges of racketeering and waging a deadly "war" on the rival Cossacks gang, federal authorities said.

An indictment announced by the U.S. Attorney's Office in San Antonio accuses three Bandidos leaders of sanctioning a three-year fight that included violent clashes with rival gangs and distribution of methamphetamine.

The accusations focus on a rivalry that came under renewed attention in May, when a meeting of biker groups at a Twin Peaks restaurant in Waco, Texas, ended in gunfire that left nine people dead.

Authorities believe that the fatal confrontation began when members of the Cossacks crashed a meeting of a confederation of biker clubs that included the Bandidos at a Twin Peaks restaurant in Waco. The dispute ended in gunfire between the bikers and police standing nearby.

The federal indictment accuses John Portillo, the Bandidos' national vice president, of using dues and donations to pay legal expenses of its members days after the Waco shooting. Portillo, along with national president Jeffrey Pike and national sergeant-at-arms Justin Cole Forster, are charged with racketeering, drug distribution and other crimes.

"The defendants will have their day in court, but today's arrests have struck a significant blow to the Bandidos' criminal enterprise," U.S. Attorney Richard Durbin said in a statement announcing the arrests.

The indictment outlines several other clashes between the Bandidos and rival clubs, including a December 2014 shooting at a bar in Fort Worth, Texas, where a biker from a different club was killed. The indictment accuses Bandidos bikers of harassing and attacking bikers across Texas as part of the "war" that Portillo declared in 2013.

The indictment cites several instances of coordination among Bandidos members in Texas and New Mexico between the spring and fall of 2015, including an attempt in April 2015 by three New Mexico Bandidos to bring firearms and ammunition into Texas to confront Cossacks members.

Prosecutors allege the group gained money and territory by extorting and intimidating other biker groups, and trafficking drugs.

The indictment characterizes the Bandidos as a group with as many as 2,000 members who "do not fear authority and have a complete disdain for the rules of society," yet adhere to an elaborate series of internal rules for record-keeping and information-gathering. The group also is accused of maintaining a formal taxation scheme, mandatory meeting attendance, daily briefings of top officials, and a rigid chain of command.

Admission to the group is a carefully staged, lengthy process aimed at preventing infiltration by law enforcement, according to investigators.