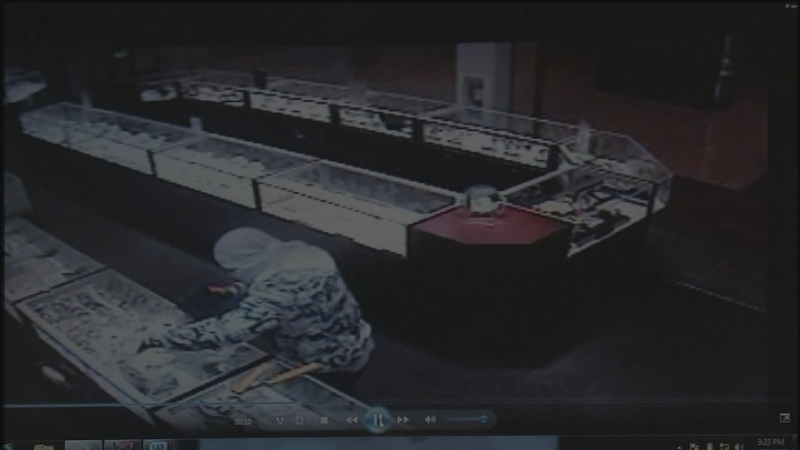 At least one glass case at Jared Vault is covered with a tarp after the heist, which happened just before 11am.

No customers were inside the store at the time, but two employees were working.

Surveillance video released by the Katy Police Department shows two suspects raiding the store with a gun and two hammers. In the video, one suspect is seen smashing the case and filling a white bag with jewelry. Moments later, the duo runs out to a waiting car.

Neither employee was injured in the heist.

"One of them was actually able to go into a back room, while the other one, they kinda forced her to crouch down behind the display case," said Javier Martinez with the Katy Police Department.

One suspect was wearing a dark hoodie and mask, and the other had a white T-shirt wrapped around his head.

Detectives now are searching for a gray Chevy Impala that fled toward the Houston area.
Related topics:
katyrobberyjewelry theft
Copyright © 2021 KTRK-TV. All Rights Reserved.
TOP STORIES
Boston-bound jet crashes on takeoff west of Houston with 21 on board
Houston executive 1 of 21 on board jet when it crashed in field
How residents in this Harris County neighborhood became numb to crime
Loved ones remember mom of 3 killed during home invasion
Big warm up ahead but another cool front in the forecast
Alvin Community College offers way to tap into oil and gas
Friendswood gas fire put out after more than 5 hours since eruption
Show More
Aviation weighs in on what might have gone wrong in plane crash
Jan. 6 panel votes to hold Steve Bannon in contempt
Astros vs. Red Sox: Houston ties the series after 9-2 win over Boston
Unsolved: A Life Never Lived
Alvin Community College gives inmates way to earn a second chance
More TOP STORIES News