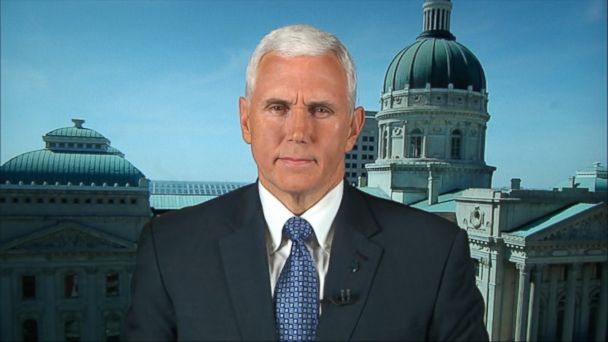 Indiana's controversial Religious Freedom Restoration Act will not be changing despite critics saying it allows business owners to discriminate against members of the LGBT community, state Gov. Mike Pence said today during an exclusive interview on ABC's "This Week."

Pence described the media coverage and opposition to the law as "shameless rhetoric," saying it strengthens the foundation of First Amendment rights rather than discriminates.

"We're not going to change the law," he said, "but if the general assembly in Indiana sends me a bill that adds a section that reiterates and amplifies and clarifies what the law really is and what it has been for the last 20 years, than I'm open to that."

When ABC's George Stephanopoulos asked Pence if the law allowed businesses like florists to refuse to work with gay or lesbian weddings, as critics have said, the governor said the situation has more to do with whether the government is involved.

"The question here is if there is a government action or a law that an individual believes impinges on their religious liberty, they have the opportunity to go to court, just as the Religious Freedom and Reformation Act that Bill Clinton signed allowed them, to go to court and the court would evaluate the circumstance under the standards articulated in this act," Pence said.

Pence, a Republican, signed the Indiana Religious Freedom and Restoration Act into Indiana law Thursday. It intends to prevent the government from infringing on individual's religious beliefs, Pence said, but opponents say the law allows business owners to use religion as a reason to legally discriminate against members of the LGBT community.

A federal version of the religious freedom law was enacted in 1993 but dozens of states have passed their own versions since then, including one passed unanimously in Illinois when President Barack Obama was a state senator. Illinois added specific protection from discrimination based on sexual orientation several years after passing its version of the law.

"If you have to go back two decades to try to justify something that you're doing today, it may raise some questions about the wisdom of what you're doing," he said on "This Week." "It should be easy for leaders in this country to stand up and say that it is wrong to discriminate against people just because of who they love."

The Indiana law gained national attention quickly after it was signed when the NCAA, which is based in Indianapolis, released a statement expressing concern that the law would negatively impact athletes and visitors in town for the Final Four games of its men's basketball tournament. Several businesses, including Yelp, have threatened to take their business away from the state.