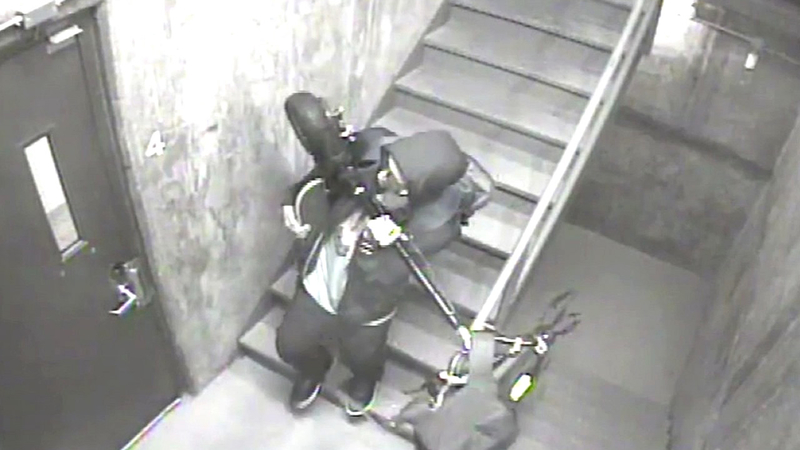 SAN FRANCISCO, CA -- The Make-A-Wish Foundation in San Francisco became the target of thieves over the weekend. A donated scooter from Giants outfielder Hunter Pence is now gone.

The Make-A-Wish Foundation is located on the eighth floor of an office building, and it was the only floor the thieves broke into, which is why Make-A-Wish believes this was no random burglary.

Tamara Burnett is the auction manager for the Make-A-wish Foundation Greater Bay Area. She says on Saturday, two men broke into the office through the back door. They took a handful of items, but the most valuable, and the most precious: Hunter Pence's customized motor scooter. The Giants outfielder donated the item and it recently sold for $40,000 at an auction.

"Did you tell the owner of the scooter?" asked ABC7's Lilian Kim.

"We've reached out to her, yes," said Burnett.

"And what did she say?" asked Kim.

"We haven't heard back. She's an incredible Make-A-Wish supporter so I know she'll be able to work with us," said Burnett

Make-A-Wish also alerted Pence. Pence's scooter was first stolen nearly two years ago outside a restaurant. He got it back after someone turned it in to police. But this time, it doesn't appear to be a crime of opportunity. Make-A-Wish believes the thieves, knew exactly what they were looking for. Not only was their floor the only one targeted, but a key is needed to get into the building.

"You look and you see everywhere on our walls. We just have our mission everywhere and they clearly knew who they were taking from and it's just absolutely devastating. It kind of breaks your heart that there are people like this out there," said Burnett.

Make-A-Wish Greater Bay Area is the chapter that granted the wish of Miles Scott, the five-year-old cancer survivor who got to be "Batkid" for a day.

Anyone with information regarding this incident is encouraged to call San Francisco police.

This was the scooter stolen from @MakeAWish #sanfrancisco office. @hunterpence donated it and it raised $40,000. pic.twitter.com/PkYt9vhQVK

Thieves broke into @makeawish in #sanfrancisco & stole @hunterpence's scooter that was auctioned off for $40,000. pic.twitter.com/S9CTNrjtS9