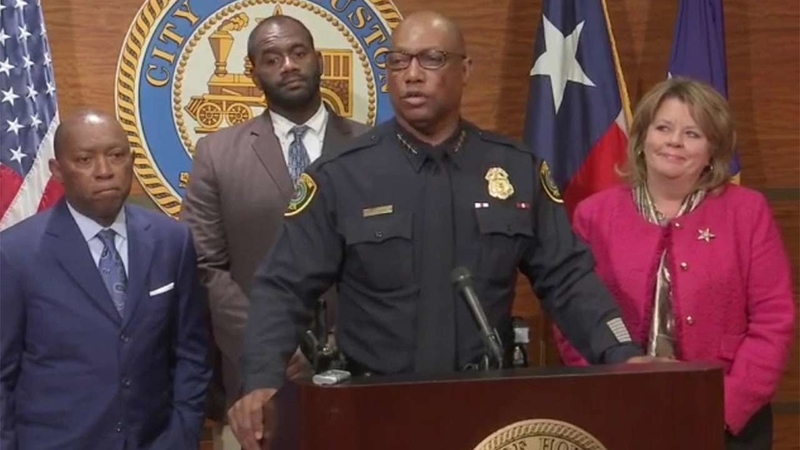 HOUSTON -- There will soon be new leadership at the Houston Police Department.

In a press conference at city hall on Tuesday, Houston Mayor Sylvester Turner announced that Chief Charles McClelland will be leaving his position, effective February 26. That's after 39 years of service.

"I want to thank all the citizens of Houston for allowing me the privilege to serve as your police chief," McClelland said. "Secondly, I want to thank all the police who have supported me from the rank and file, from all of our support staff, all of our civilian police, who certainly worked with me to accomplish all the things that HPD has been able to accomplish in the past five or six years. I couldn't have have done it without them."

McClelland became chief of police in April of 2010. He joined HPD as a patrol officer in 1977. McClelland has a bachelor of science in criminology and a master of arts in sociology from the University of Houston. He is a graduate of the Federal Bureau of Investigations National Academy, the Federal Bureau of Investigation National Executive Institute and has received numerous awards and commendations.

Mayor Sylvester Turner is expected to name an interim Police Chief within a few days. Sources say it will most likely be one of the current Executive Assistant Chiefs. Those potential interim chief candidates include: Chief Martha Montalvo, who is the current Chief of Staff; Chief George Buenik, who responsible for all of the Department's strategic operations; and Chief Michael Dirden, currently responsible for all aspects of the department's patrol units.

After an interim chief is named, a nationwide search will take place for a permanent replacement. However, it is important to note that Chief Charles McClelland first served as Interim Chief before being named to the permanent job by former Mayor Annise Parker.