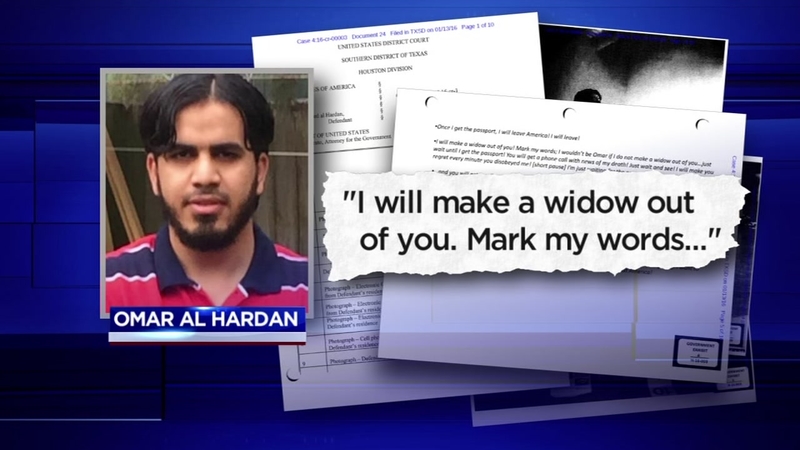 HOUSTON (KTRK) -- A terror suspect who was arrested in Houston last week went before a judge Wednesday afternoon, where his bond was denied. During testimony, we learned he allegedly discussed placing bombs at Houston's Galleria.

FOR COMPLETE COVERAGE OF THE ORLANDO MASS SHOOTING

Eyewitness News also obtained photographic evidence used during the bond hearing -- photos of what was seized from his apartment and one of Al Hardan allegedly pledging his loyalty to the Islamic State.

A federal investigator testified that Omar Faraj Saeed Al Hardan, 24, wanted to blow up the Galleria and Sharpstown Mall with a remote bomb. According to testimony, Al Hardan would put the bomb in a trash can and detonate it using a cell phone.

They also say he received military training on how to use an AK-47 late last year at a farm just outside of Houston. Agents say the training was conducted with a confidential informant, and the entire event was recorded by federal investigators.

The federal agent also said that Al Hardan wanted to sneak into a military base in Grand Prairie, Texas, and blow up Humvees.

The agent says Al Hardan and Al-Jayab messaged about traveling to Syria and joining ISIS fighters. In an apparently recorded conversation, he allegedly told his young wife that he was going to "make her a widow" after he gets his U.S. passport. Authorities say Al Hardan told his 18-year-old wife and elderly mother that he wanted to fight with ISIS, and blow himself up.

Al Hardan was arrested on January 6 at the Department of Homeland Security.

Prosecutors allege the Houston terror suspect has been assisting ISIS with material support and resources since at least May 2014, and also made false statements to investigators.

Al Hardan appeared before a federal judge for the first time on Friday, answering some questions in English, others through a translator.

The Houston terror suspect is a Palestinian born in Iraq, but has lived among us since November 2, 2009, when he entered the United States as a refugee. He is married with a 10-month-old son.