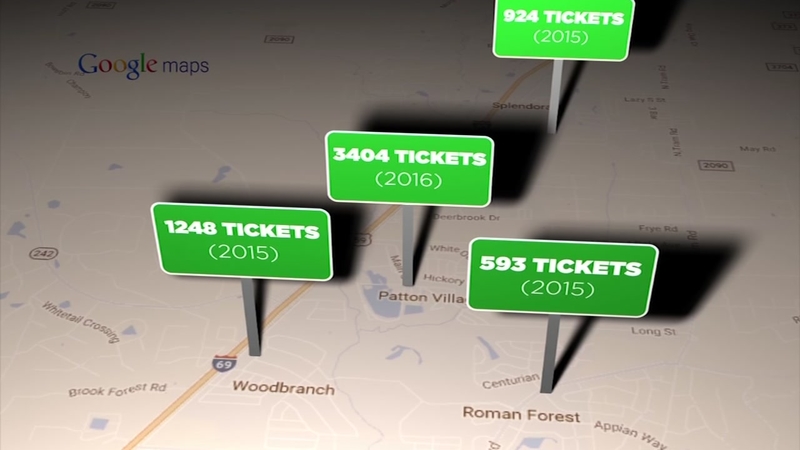 HOUSTON (KTRK) -- Every good investigation starts with a tip -- and this one started with Vito Vargas.

Driving on Highway 59 northwest of Houston, Vargas got a ticket earlier this year in the city of Woodbranch Village. Instead of just paying the ticket, Vargas dug in.

And then he called us.

"The only reason I started this was that they gave me a ticket," he said. "It's not illegal to write tickets, what is illegal is what they did with the money."

That's not up for ABC13 to decide, of course, but one thing that Vargas said was crystal clear..

"They picked on the wrong guy."

It's probably no surprise that drivers in this part of the Houston area know these cities have a tough reputation for tickets. Some call them speed traps.

What Vargas wanted to know, though, was how much money these little cities taking in from tickets.

State law says cities under 5,000 people can only make 30 percent of their income from tickets but Ted Oberg Investigates revealed some may be making much much more.

"There's quite a bit of money they make," Vargas said of Woodbranch.

Vargas said his research shows that $329,000 comes in to Woodbranch from tickets, which is 65 percent of the city's revenue.

Its police officers have handed out at least 3,404 tickets in the 2016 calendar year.

The Dallas Morning News said Patton Village "is probably best known for its reputation as a speed trap, which Patton Village leaders say they're trying to overcome."

Ted Oberg Investigates found that reputation -- at least for those who have gotten tickets -- is alive and well 28 years later.

ABC13 spoke to Erin Haase who got a ticket for "speeding" and "changing lanes twice without signaling."

And Chad Lilly was popped for "Not coming to a complete stop."

"They'll give their grandmother a ticket," she said. "It's been that way my whole life."

But there's a new police chief in town.

When now-Chief Shannon Sharp was researching was applying for the job, he, of course, researched the town.

"I type in Patton Village and it says speed trap," Sharp said. "It's the first thing in Yahoo."

And he wants to change that reputation.

And before noon that day he was looking at the city's speeding tickets, he said.

"The lowest speed I found was 82 miles-per-hour," Sharp said. "That's not a speed trap ticket."

He said he believes a 67 in a 65 mph zone would be a speed trap and his officers aren't doing that.

But it doesn't mean all these tickets aren't a problem.

But because of that Texas state law that says small towns can only collect 30 percent of their revenue from speeding tickets -- the rest has to be sent to the state.

The state comptroller says Patton Village hasn't sent anything back from fines in at least three years.

If ticket revenue drops, there are few apparent ways to make up the gap in the budget.

Tickets bring in eight times what property taxes do.

Sharp says he doesn't feel financial pressure. City Council's orders to him were to work on quality of life issues around the city. The city leaders never mentioned tickets.

But Sharp does want to fix how drivers view the city.